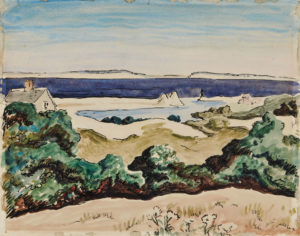 Two works in Skinner’s September 27 Fine Paintings & Sculpture auction will surely please lovers of Martha’s Vineyard: a view of Menemsha Pond by Thomas Hart Benton (Lot 306) and Dinghies at a Shallow Mooring by Loïs Mailou Jones (Lot 321). Both artists had enduring ties with the island and were influenced by the island’s landscape and culture, even though their reputations were largely built elsewhere.

Benton’s affection for Martha’s Vineyard may not be as familiar to many art lovers as are his ties to Missouri and the Midwest. Famous for his American Scene paintings, prints, and murals, Benton began visiting Martha’s Vineyard in 1920, lured from New York by the then-inexpensive accommodations available in the fishermen’s cottages in the western end of the island. Settling in Chilmark, Benton spent summers on Martha’s Vineyard until his death in 1975 at the age of 86, and his love of the island was manifest in many landscapes and portraits of islanders and his circle of family and friends. His Self-Portrait with Rita, in the collection of the National Portrait Gallery, Smithsonian Institution, shows Benton and his wife on the Vineyard’s South Beach.

Benton’s Vineyard works, including the watercolor of Menemsha Pond being offered on September 27th, show his appreciation for the landscape and confirm his belief that expression should be rooted in the artist’s environment. During the 1930s, Benton’s landscapes and genre scenes of the Midwest may have made him America’s foremost regionalist painter, but the Vineyard can rightly claim its own important place in his career. Benton’s Vineyard life and work are the subject of a biography by Polly Burroughs, who wrote, “The only place he seemed to let down his guard was on the island…Tom was quiet, reflective, philosophical, embarrassingly frank about himself with an infectious wit, and genuinely sensitive to the poetry of the island.” 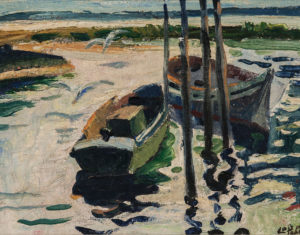 The beauty and spirit of Martha’s Vineyard also captured the imagination of Loïs Mailou Jones. Jones grew up spending summers on The Vineyard where her grandmother, Phoebe Moseley Adams Ballou, was one of the first African American summer residents of the Island. Martha’s Vineyard was also where she met the African American sculptor Meta Vaux Warrick Fuller, who encouraged her to become a professional artist, and where she held her first solo exhibition at the age of seventeen. Jones was very sensitive to the beauty of the island, crediting the charms of the land and sea for her decision to be a painter. Vineyard culture inspired one of Jones’s most pivotal works, Indian Shops, Gay Head, Massachusetts, the prize-winning landscape that the artist first submitted to an exhibition at the Corcoran Gallery in 1941. At that time, Jones was forced to disguise her ethnicity, since African American artists were not permitted to enter the competition. In 1997, in a generous gesture, the artist gave the painting to the Corcoran Gallery of Art, and it is now part of the collection of the National Gallery of Art in Washington, DC.  Although a professor at Howard University and an artist with an international following and roots in France, Haiti, and Senegal, Jones maintained her ties to Martha’s Vineyard, returning to paint views around Menemsha, and eventually opening a gallery studio in Edgartown in 1988. The painting being offered on September 27 shows an evocative and timeless glimpse of moored boats in quiet Vineyard waters.