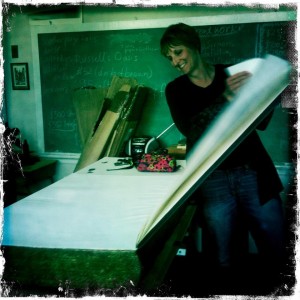 Book expert Devon Gray with a giant book she constructed for the movie R.I.P.D.

The movie R.I.P.D. opens today, and I’ll be there in the theater hoping to catch a glimpse of a single prop: a book that I made. This isn’t just any book – it’s 3 x 2 feet and weighs over 100 pounds! I made the book two years ago, and now I’ll find out if the book made the cut in the final film.

My first opportunity to make books for movies came in 1995, when The Crucible was being filmed north of Boston. Boasting an impressive cast that included Daniel Day-Lewis and Winona Ryder, the project, based on Arthur Miller’s seminal play, aimed at period perfection. Every detail of the production had to portray material culture of 17th century colonial Massachusetts accurately. For that film, I created period-style leather bound blank books in which the Salem witch trial judges could jot their notes. While Abigail Williams (Winona Ryder) makes her dramatic testimony in court, you may see Judge Samuel Danforth (Paul Scofield) taking down his impressions of her performance in one of the books that I made. 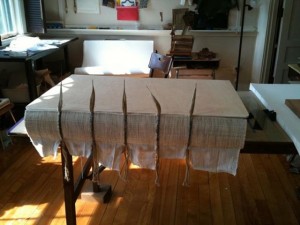 The giant book under construction in the bookbinding workshop

The props handled by actors in films are procured and managed by the property master, and it must be one of the most interesting behind-the-scenes assignments on set. Working closely with the director and the art department, the property master is responsible for gaining an understanding of the director’s vision for the look and feel of the film, and then finding artists and craftspeople in various fields who can fabricate the items necessary for the shoot. I was lucky to work with the same property master, who, after our initial project, called on me again when he had the need for custom books.

I was very pleased to contribute the bright red notebook used in David Mamet’s film, The Spanish Prisoner. If you haven’t seen this film, and would like to be surprised by a key twist in the plot, you may want to skip the rest of this paragraph. The main character in the story has devised a foolproof algorithm for success on the financial markets, which he has carefully inscribed into a bright red leather bound notebook. I was asked to make two identical notebooks for the film. In the story, the hero is lead through a series of distracting exchanges and sleights of hand involving the red notebook. Because I knew about the second book, I was not surprised when it was opened to reveal not the copy inscribed with the secret formula, but another notebook filled with nothing but blank pages. 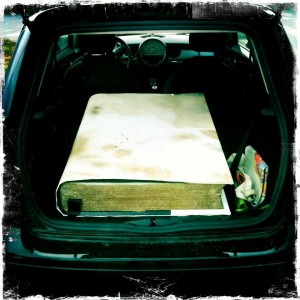 The book barely fit in the car!

The R.I.P.D. assignment came in July of 2011, and when I was asked to make this gigantic book, I said yes without fully contemplating the nature of the assignment. Once I started the project, everything from paper, to boards, to tools became a logistical problem. That book scared me every single day, but after finding paper in 38 by 50 inch sheets, buying hundreds, folding them, building a sewing frame, sewing the leaves together, cutting and fitting birch plywood boards from the lumber yard, and using the skins of four goats, I had a book. It was a book I couldn’t really lift – more like furniture than reading material– and it barely fit in my car. I was told that a calligrapher would inscribe the book with the names of the dead, to be used as reference material for the officers of the R.I.P.D. (Rest in Peace Department).

Watch the comments for my reaction after viewing the movie. I hope my giant book gets its moment in the spotlight.

3 thoughts on “Making Books for Movies: A Book Appraiser’s Glimpse of Hollywood”