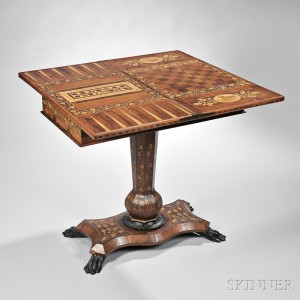 The rugged terrain of Killarney, Ireland, much like its American topographical cousins such as the Catskill Mountains and White Mountains, became a fascination for early well-to-do Victorians looking for a travel respite in the country.  The idea of tourism to Ireland’s stately homes and ghostly abbeys was soon entered into as a pastime for those that could enjoy leisure travel.  Around this time in the 1830s to mid-nineteenth century, tables, trinkets, boxes, and other souvenirs all became fashionable tourist items to take home, perhaps even as a reward of sorts to those who could navigate the steep green climbs of the West coast of Ireland.  Killarney Ware, as it came to be called, continued in its popularity throughout much of the 19th century. 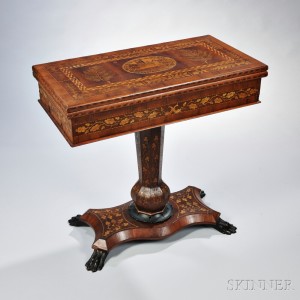 Yew, oak, and arbutus wood (though not indigenous to Ireland, it grew with abandon there) were often used in Killarney Ware, and the Victorian Irish Marquetry Inlaid Games Table, Ireland, mid-19th century, (Lot 630, Estimate $800-1,200),  to be sold in the Saturday, October 10th  European  and Decorative Arts auction (#2850B) represents a  complex and playful mix of fanciful motifs; oak garlands, elaborately rendered ferns, and rondels featuring a depiction of the 15th century Franciscan Muckross Abbey.  This craftsmanship is a perfect example of the range of skill that could be employed for a tourist trade table in the Victorian period, and would make a great piece to fit into any living room or den, complete with chess/checkers, cribbage and backgammon game boards carved into its interior table surface.