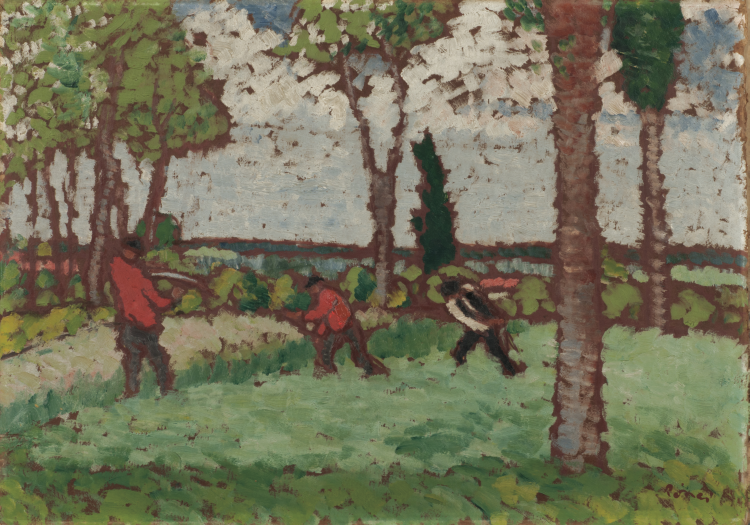 When I first saw the painting Figures in a Field, it jumped out as having an animated, almost pointillist brush stroke, and a Post-Impressionist palette. It was clearly the work of an accomplished artist, yet when it was taken in with a large consignment of artwork, furniture, and decorative items, it was unattributed, and listed simply as an oil landscape.

The piece was signed, and I quickly realized that this was an early 20th century work by the Hungarian master József Rippl-Rónai. Hardly a household name on our side of the Atlantic, Rippl-Rónai was a leading artist in Budapest’s vivacious arts scene in the early 20th century.

It isn’t enough just to find a signature, though. Now, I had to confirm that the painting was authentic.

An expert here in the United States said that the painting looked promising, but thought it would be wise to consult the staff at the Hungarian National Gallery in Budapest, so I emailed out snapshots of the painting.

A reply came back: “The painting isn’t right.”

I was floored. The Paintings department had a little sit-down, and we decided that we couldn’t give up. The painting was too expertly executed to not be right. Probably, the snapshots we sent just didn’t do the painting justice.

We decided to call in the professionals: our in-house photographers, who can masterfully light and refine the color balance of an image much better than any of us. They worked their magic, and shot some 4 x 5 transparencies of the painting.

Across the ocean, the experts found these images much more compelling, but they still wanted to see the painting in the flesh. Although photography is a fantastic tool, nothing compares to seeing art live. In person, the Rippl-Rónai painting sings.

Through a complicated but well-practiced series of shipping arrangements, the painting traveled back to its homeland for examination.

This time, the response from the experts was different. Seeing the work in person, the curators and conservator agreed that there was no question that it was an authentic József Rippl-Rónai.

Now back in Boston, the painting is ready to be seen in person by all of you. Whether you merely come to look or come to bid, come in and see the true depth of this lovely painting during one of the auction previews being held September 7th through 9th. Clearly, images don’t do the painting justice.

4 thoughts on “Home to Hungary and Back Again: The Travels of a József Rippl-Rónai Painting”