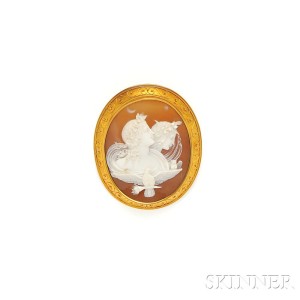 The art of cameo carving has been around for centuries, and may have originated in ancient Sumerian jewelry where carved beads were used as seals. Generally, hardstones with layers of differing colors are carved to highlight the contrast in colors; precious gemstones are also engraved as intaglios, cameos, and seal rings.

The ancient Greeks and Romans produced cameos to be worn in jewelry, often depicting deities and other talismanic images.  They also often depicted the Emperors, and the finest ones depicted multiple figures in various layers. The Renaissance saw a renewed interest in cameos. The great Lorenzo de’Medici, who acquired examples from antiquity as well those carved by master engravers of the period, kept a vast cameo collection is his scrittoio, a small room in the palace that held his collection of ancient and contemporary objets including precious engraved gems, coins, and plaques.

With the archaeological findings at Pompeii, the 18th century saw a revival in cameo collecting and carving. With Neoclassicism in full swing, cameos again were highly sought after by great collectors, including Napoleon, who gave Josephine multiple jewels set with cameos, including a cameo tiara that is currently part of the Swedish Crown Jewels. Later in the 19th century, shell cameos became popular, along with the ubiquitous image of the figure in profile. 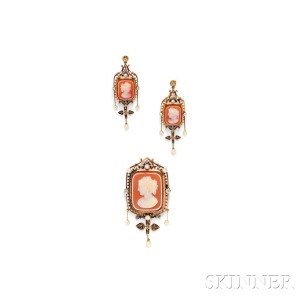 In Skinner’s upcoming Fine Jewelry auction, there are several lovely examples of cameo carving in various media. First we have a shell cameo, Lot 109, and while shell is not the most valuable material this lot is of note because of the quality of the carving and the complexity of detail. The double cameo depicts Day and Night, and both figures are meticulously rendered. The curls in the hair are finely realized, and what stands out most to me is the delicate carving of Night’s flowing veil.

Lot 464 is a demi-parure consisting of a pendant/brooch and earrings from the 1870s. The cameos are hardstone, and this type of parure is very typical of the period. While this is a matched set, each maiden has a unique coiffure of upswept curls and garlands. The backgrounds are matte, to further contrast the figure from the background. 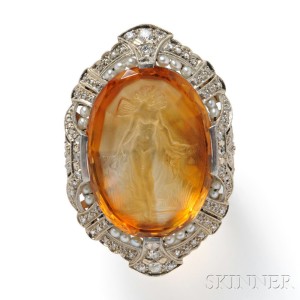 Lastly, Lot 345 is of particular note because it is a carved gemstone cameo cuvette, in which the cameo is carved into a concave depression in the stone. In matte finish, the gemstone is beautifully carved to depict a nude figure of Psyche (who can be identified by her wings) by the banks of the river Styx. In her final two labors for Venus, Psyche must collect water from the source of the Styx and then finally descend into the Underworld to gather some of Proserpina’s beauty. The detail is wonderful – the figure is beautifully realized, and the fabric of her flowing robe epitomizes the work of a true master carver.

Please take some time to go through all of the fine cameos and intaglios in Skinner’s fine jewelry sale and in future sales – we think  you’ll gain an even greater appreciation for this often overlooked craftsmanship that was once so prized by collectors in times gone by.