Guest post by John T. Kirk © 2013. The John T. Kirk Collection will be offered in the American Furniture & Decorative Arts auction on August 11, 2013 in Marlborough. 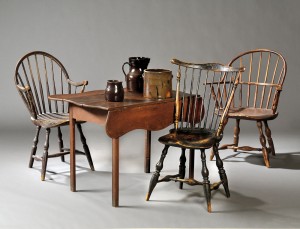 I grew up twenty miles west of Philadelphia in what was, in the 1930s and ’40s, a rural landscape. Kirks had been in the Philadelphia area since the 18th century and it was logical that my parents had some early furniture. As was natural at that time I happily refinished an array of pine pieces I purchased. I used “Strypeeze” or a belt sander to remove paint and then applied an orange shellac finish. The Arts and Craft Movement had heralded a “return to wood,” and the Colonial Revival encouraged the removal of dust and dirt from furniture retrieved from attics, basements, barns, and even chicken coops by people wanting to place heirlooms in clean domestic settings.

I trained as a cabinetmaker so I could have an American antiques shop but then spent two years in Copenhagen studying furniture design with Kaare Klint, an essential figure in developing Danish Modern. There the emphasis was on perceiving and creating aesthetic qualities. Eventually I became an Art History graduate student at Yale, where half of my time was spent assisting curator Meyric Rogers in reassembling the great Garvan collection of about 1,500 pieces of early American furniture. It had been dispersed for about thirty years into historic houses and other museums because Yale lacked museum space to house it. Rogers was able to foil the director’s plan to sell the Garvan collection and my job was to sort and arrange the objects into logical groups as they arrived by the truckload at a study-storage area in the basement of the Yale Press. It was hands-on learning as we re-cataloged and re-evaluated what Garvan had bought. Rogers had the museum training and I the cabinetmaker’s ability to ask “What are those holes doing there,” or “Why are there inconsistencies in color on the inside of the woods, suggesting additions, subtractions or total faking? ”

To help evaluate all this material Rogers invited the great dealer Albert Sack to visit the basement. Soon Albert and I had a friendship that enabled me to spend hours at Israel Sack in New York, where Albert and I pulled drawers and up-ended pieces in the elegant showrooms. Early in my time at Yale Rogers returned from The Hartford Antique Show and said “If you want to understand country furniture get to know Roger Bacon.” Roger had been a Maine farm boy who, after a brief stint on Broadway, became a prominent dealer in objects with untouched surfaces. While a few other dealers valued the untouched, Roger heralded it. His cry to his wife “Jesus Christ, Ruth, look at that,” echoed throughout the field. Sack honed my understanding of qualities of line and form in high style early furniture and Bacon made plain to me the values of personal rural work. 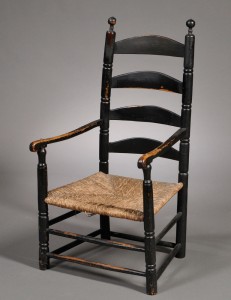 The first piece of worn furniture I purchased after starting at Yale was the bold slat-back armchair, Lot 229. In 1975 I published The Impecunious Collector’s Guide to American Antiques, arguing that it was form and surface that should excite the buyer. The chapter I titled “Buy It Ratty and Leave It Alone” firmly brought that focus into the market place, and now the cry “It’s untouched” is often heard on the PBS program Antiques Roadshow. Because I had done some television programs on furniture for WGBH, Boston, I was asked if I wanted to host “Roadshow” when the concept came from England to America. It happened that the timing was wrong because I was in the throes of moving to the west coast with Trevor Fairbrother, who assumed a variety of responsibilities at the Seattle Art Museum. We moved back to New England five years later.

Not all dealers where happy with my championing of “Buy It Ratty and Leave It Alone.” I had recently been director of The Rhode Island Historical Society and curator of American decorative arts at the Museum of Art, Rhode Island School of Design. When I lectured to Providence audiences I stressed the importance of condition, form, and surfaces, and before long a local dealer took me to task for diminishing the number of customers who had previously been happy to purchase refinished furniture. He changed his words, however, when he realized he could put an object with a good early surface directly into his showrooms, without the labor of cleaning off the paint, and charge more because it was “untouched.” 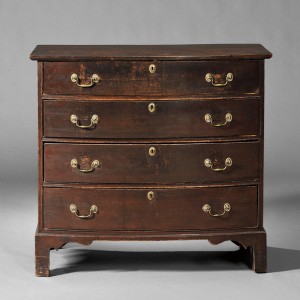 Skinner is a firm that I have long valued because Bob Skinner understood the beauty and excitement of an untouched great form. Karen Keane, the CEO of Skinner, was a graduate student at Boston University when I taught there as a Professor of Art History. We became friends while she took my classes on American furniture. She recently told me that it was as a young employee at Skinner that she gradually learned from Bob the joy of seeing and handling wonderfully aged work. Steve Fletcher, longtime head of the American Furniture and Decorative Arts Department, is another good friend, and it is always a delight to see him enthuse over a great work, both in the gallery and on television. I have bought, sold and lectured at Skinner and I used to take students there for instruction. Two simple and very wonderful pieces purchased at Skinner, on different occasions, are the desk, Lot 206, and the chest of drawers, Lot 201. Both have a tight neoclassical stance that exemplifies the best of rural cabinetmaking. The desk is without grand features but its tall legs create an elegant space below a gallery with nicely curled end boards. The confident curve of the front of the chest echoes the ovals of the brasses, and this proud piece, like the desk, has fine old color.

The blue desk, Lot 245, spent part of its life in the post office of Chester, New Hampshire, as a metal label attests, and I purchased it from Roger Bacon. The surface and its color are equally wonderful. Confronted by this heavyset desk, one of my graduate students said, “I don’t get it.” I think the maker knew that the tapered legs had to “work” with the mass of the large useful top, and so they are broad on the front and narrow when viewed from the sides. 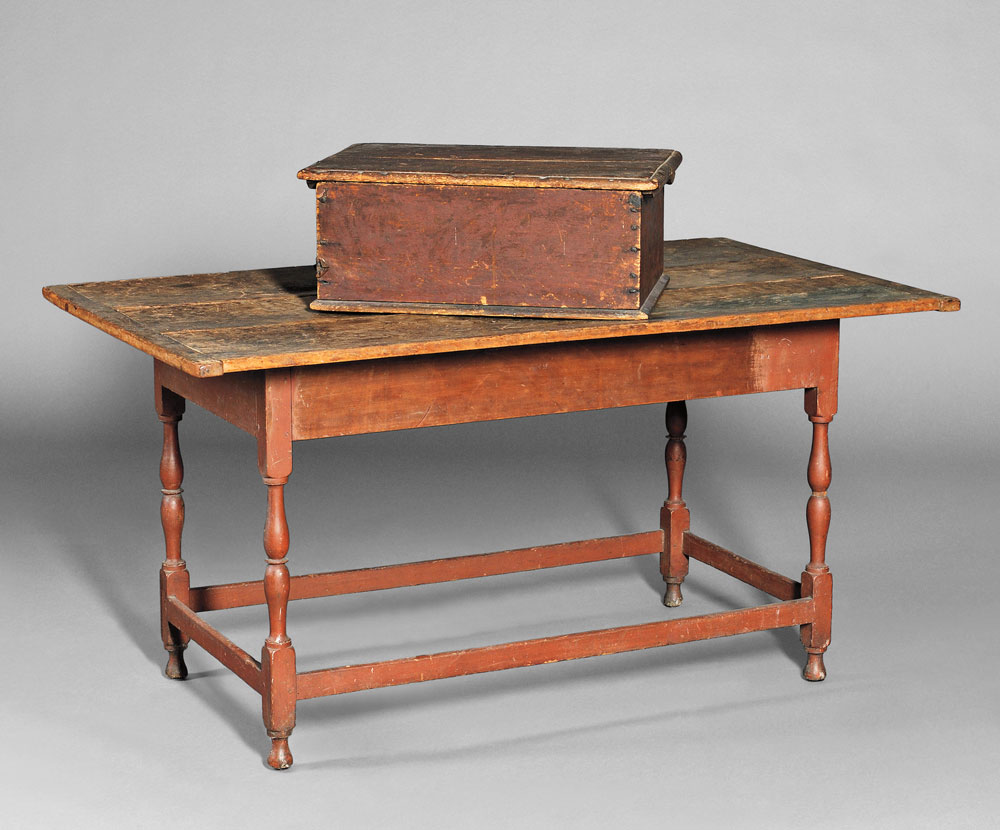 Much of the furniture here has special characteristics. The red stretcher-base table, Lot 230, shows how wood adjusts over time. There is shrinkage between the top boards and the end cleats now project beyond them. It never bothered me that the card table, Lot 236, had lost its top leaf. What remains has such great form and color, and the right end board has a light rough circular area where at least one generation struck matches! The chair table, Lot 208, came from Roger Bacon. Its chip-carved oak shoe feet suggests an early date, as does the use of paired curves on the front skirt and the two rails that hold the top boards. The early bible box, Lot 231, lacks decorative carving or painted designs, but it has a great old paint surface and an old leather patch. Bacon sold it to me in 1969. Another beloved Bacon item is the large bowl, Lot 212. It once served as a teaching prop when I appeared on a morning TV program to explain the visual qualities I was preaching. The other guest that day was Julie Harris, who, with fine theatrical aplomb, appreciatively stroked the red outer surface while I was talking! I hoped she understood the beauty of what she touched. 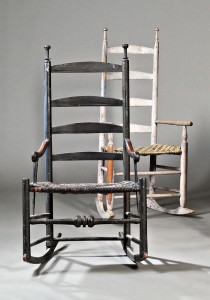 Many of the items auctioned here played a role in a series of early houses I restored and lived in. In the late 1950s I purchased the first one, a small one-and-a-half story, 1820s-ish building in Center Sandwich, New Hampshire. In those days furnishings were being sold directly from early houses, and I purchased the black rocking armchair, Lot 203, and the gray chair, Lot 204, locally. I published the gray one as the kind of lean form that chair-makers produced before they joined Shaker communities and proceeded to make, for theological reasons, this kind of “wordly” design even more simple.

When Repairs have Artistic Merit

I learned from Roger Bacon that repairs might have aesthetic merit. The great Windsor side chair, Lot 219, was illustrated in Wallace Nutting’s Furniture Treasury, a 1928-33 publication whose 5,000 photographs made it an invaluable authority for a generation of curators, collectors, and dealers. The right ear and two of the back spokes are later, and there are wonderful iron repairs. The turnings of the legs, the shape of the seat, the early-19th-century decorative paint, and the iron reinforcements work together to make the object exciting. The roundabout or corner chair, Lot 228, has early black paint over original black paint; the top surface of the ends of circular top rail were at first red. At some point a curving iron brace was added to reinforce it. Roger Bacon loved that it came from the Gooch family of Pickpocket Road, in his hometown, Exeter, New Hampshire. The wonderfully personal armchair, Lot 224, once belonged to the pioneer collector and author Luke Vincent Lockwood. One arm and two slats were “home repaired” before it was painted green.

The furniture fragments, Lot 247, were illustrated in books and used in public lectures and classes because they show how parts change over time in both surface and color as air, light, and dirt bring change. The outside of the bracket foot in Lot 247 displays the proper darkening of varnished walnut. Inside there is a correct unity of unfinished walnut, unfinished pine diagonal brace and maple corner block. When the maple block is slid away the surfaces it normally covers are properly lighter in tone.

Some 19th-century Farmers’ Almanacs described how to convert “uncomfortable” early chairs into up-to-date upholstered items. The back of a banister-back chair in Lot 247 has beautiful shaping and aged-wear, but the tops of the finials are missing and a horizontal strip of wood has been added. This alteration was made when the original chair was upholstered in the Victorian period.

The John T. Kirk Collection will be offered at auction on August 11, 2013 in Marlborough.

2 thoughts on “I Bought it "Ratty" and Left It Alone”