I’m a bit of a process geek when it comes to nineteenth-century photography. Technology advanced in such rapid and interesting ways during the early years of the medium’s existence. Photographers were constantly experimenting with, combining, and improving upon formulas for making negatives and developing and fixing images. A good example of these innovations—a salt print (Lot 76, Estimate $3,000-5,000) made from a waxed paper negative by the French-born American archaeologist John Beasley Greene (1832-1856)—is one of the highlights of Skinner’s January 22 Fine Prints & Photographs auction. 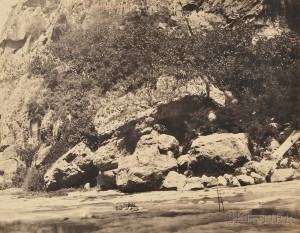 Greene had the good fortune to study with the French photographer Gustave Le Gray, who is best known for his seascapes made through combination printing. Because exposing for the sea often resulted in cloudless skies, in this technique, separate negatives were made of the ocean and the sky and then combined to produce one print. Under Le Gray’s tutelage, Greene created views of Paris, still lifes, and landscapes using the waxed paper negative, or calotype, process. The support for the negative was a piece of paper treated with light-sensitive materials. After exposure, hot wax was applied to the sheet to increase transparency and reduce the visibility of the paper’s fibers.

In 1853 at the age of twenty-one, Greene undertook an expedition to Egypt and Nubia. He was the first practicing archaeologist to use photography to document the region’s ancient monuments and their inscriptions in addition to the natural landscape. Upon his return to Paris, Louis Désiré Blanquart-Evrard published Le Nil, monuments, paysages, explorations photographiques par J. B. Greene, an album of ninety-four photographs that, because of its rarity, was likely self-funded by Greene.

After a second trip to Egypt in 1854, Greene, who suffered from poor health, visited Algeria, with its favorable climate, at the recommendation of his doctors. There he pursued his interest in artistic landscape photography as demonstrated by the salt print on offer. As with the calotype process, a sheet of paper is soaked in light-sensitive materials which embed in the paper fibers, resulting in prints that are typically more atmospheric with softer lines and contours and subtle gradations of tone. Greene utilizes the Algerian sunlight to accentuate the surfaces and textures of the rocks and foliage, creating a beautiful and calming abstraction of the river and its bank.

Greene’s promising career was cut short when he died tragically young in Egypt, reportedly in Cairo, in November of 1856, most likely of tuberculosis.