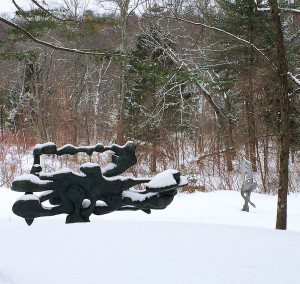 I have a confession to make.  When you’re not shoveling it or raking it off your roof, the snow is actually beautiful. You may think I have an acute case of cabin fever, but let me explain before you deem me to be a total nut job.

I grabbed two young friends and my snow shoes and headed to the deCordova Sculpture Park and Museum on a snowy Thursday.  Many of the smaller works near the museum’s entrance were buried beneath mountains of the white stuff, but there was still plenty to see, and all of it was transformed.  We started below the museum, near two works by Isaac Witkin:  Maiden’s Dream, 1996 on the left and Jacob’s Dream, 1986 (figure 1).  Given that Witkin grew up in South Africa and trained in London, he probably wasn’t thinking much about snowscapes when he made these two.  Regardless, thanks to the snow, the bottom third of each work is hidden, making their scale more human and less intimidating. These flowing organic forms, which echo the landscape in all seasons, relate to the drifts and eddies of snow both on the ground and falling from the sky. The forms seem like liquid, frozen in an instant. 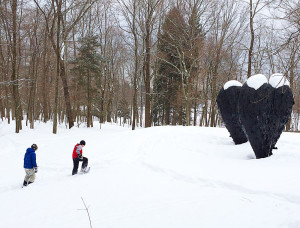 Just through the trees and down the slope from the Witkins is Jim Dine’s Two Big Black Hearts of 1985 (figure 2). From a distance these huge looming hearts seem cold, and the snowcover on top hardly dispels the feeling.But up close, they are textured with objects that represent fond memories for the artist, including shells, faces, and tools.  Each element relates to his family and friends, and thus the colossal hearts are inspired by warmth and love.  It just takes getting close to them to see this.  Even if the hammers and pliers don’t have the same connections for you as they do for Dine, the hands and faces will. 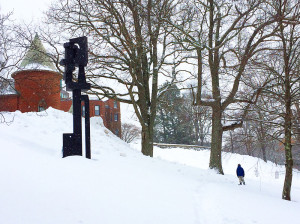 Through the woods to the summit behind the museum we approached Dorothy Dehner’s Fortissimo (figure 3). Described by one of my intrepid young trekkers as looking “sorta like a weird Ent,” the composition is derived from her small 1970 bronze titled Fist.  Anyone who has read The Lord of the Rings knows just how powerful an angry Ent can be, though in general they are mild creatures. One could argue that the silent strength of Dehner’s Fortissimo has a power not unlike that of an Ent. The fact that there was no snow massed on any of its horizontal surface made it seem all the more likely that, like an Ent, it was capable of movement.

The final element that always makes snow magical is hot cocoa, and yes they serve it in the café.  So as absurd as it sounds, I urge you to get out into the snow and try to enjoy.  After all, it won’t be gone until July or so.

Skinner is proud to be both a Corporate Sponsor of the deCordova Sculpture Park and Museum and a participant in Black and White in the Park.