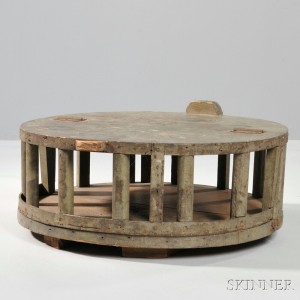 Savvy buyers of Americana have long known that it’s easy to buy an antique cutlery tray to creatively house their remote controls. They also know they can use a sewing stand or work table as a night stand, or a card table in the front hall to throw their keys on when they come in the door. Polychrome-decorated game boards have been steady sellers because collectors know they provide a pseudo-modern pop of color, sometimes for a bargain price. There are even those who use 19th century cranberry scoops as chair-side magazine holders. And of course, we’ve been mounting electric light sockets on all manner of things for a hundred years.

It took imagination for the first re-purposing of formerly utilitarian pieces, and that inspiration and creativity is one of my favorite prisms through which to view antiques. If it can be re-purposed in some way, and given new life by new uses, the antique ceases to be a “cutlery tray” or a “game board.” It is welcomed into a new home by a new custodian. Perhaps a good dose of this type of resourcefulness could be the spark that ignites a whole new group of buyers for American antiques.

Skinner’s American Furniture & Decorative Arts auction on February 27th offers plenty of bureaus, dining tables, paintings, and even a sideboard. In their new homes, these items will be used, most likely, as their original makers intended. But there also are many items that require the gift of imagination to rejuvenate them. 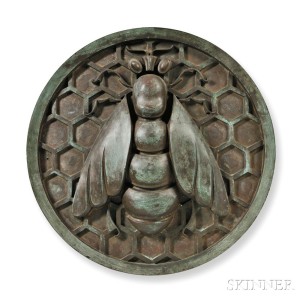 A country store cheese box (Lot 335) is a low cylindrical mass with old green-gray paint and a half-hinged top. It’s about 10 inches high and is unlikely to be used to display cheese on a country store counter-top again (especially if the FDA has anything to say about it). But you can’t deny that it has potential as something unique. It’s surprisingly modern in form, and built solidly enough that it could be a footrest in front of a low-profile mid-century modern sofa in the right setting (with the added bonus that you can store things inside it). One could even have a custom cushion made to match.

Lot 466 is a cast bronze plaque, 32 inches in diameter and about 4-5 inches deep. It was probably made as an architectural element, to be applied to a building, and shows a central bee surrounded by honeycomb. Bees have long symbolized industry, so your guess is as good as ours on what type of building it may have been displayed. But like the cheese box, it’s not likely headed to where it began its life. I first saw it mounted as a wall sculpture in a private collection, and it looked great! My thought for it now? Since it’s cast bronze, originally meant to be mounted outside, and therefore capable of enduring sun, rain, snow, wind, and whatever else the weather can throw at it, why not make it the centerpiece of a well-landscaped flower garden? 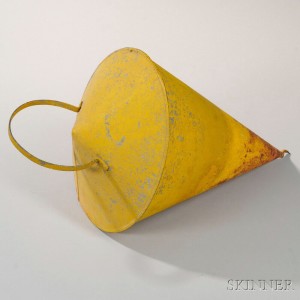 Lot 430 is a bright yellow painted buoy made of tinned iron, of conical form with a domed top. Now, while I’ve said that the cheese box will probably never again display cheese, and that the bee plaque will probably never again adorn the exterior of an industrial building, there is a small chance that under the right circumstance, one of those things may happen. But this buoy will certainly never again be submerged in water. Shockingly yellow and undoubtedly modern in appeal (and sold with a custom iron mount, for your convenience), the buoy could hang from its handle as a lightless chandelier on a screen porch at a seaside home, or could be casually displayed lying on its side as a piece of sculpture – no longer a buoy.

All three objects (and many others from the sale) will prompt not just the question, “Where did you get that?” because of their obvious visual appeal, but also, “What is it?” or, “What did it do?” In my opinion, the answer to the last doesn’t have to matter anymore, because imagination can make an object whatever we want it to be.