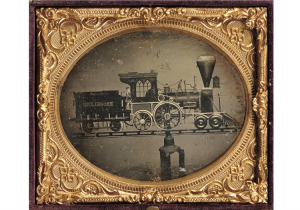 How do you tell the difference between a daguerreotype, ambrotype, and tintype?

If you’ve been browsing through the Early Photography Collection of Rod MacKenzie, you’ve seen these three types of early photography many times. Each has an interesting history.

Here are five questions to ask the next time you’re trying to identify an early photograph:

1. Is the image reflective or mirror-like?

Daguerreotypes have a reflective surface, almost like a hologram. When viewed from one angle, a daguerreotype appears shiny and light, and from the other angle it is negative with a more matte finish.

2. Is the image whitish-gray with low contrast?

It could be an ambrotype or tintype. Neither will show the hologram effect of a daguerreotype.

3. Is the image on glass or metal?

Ambrotypes were developed on a glass plate, while tintypes were made on a thin iron plate. You can test to see if an image is a tintype by applying a small magnet to see if it attracts. However, this method is not foolproof. I’ve found a few ambrotypes that were backed with a metal plate which also attracted a magnet.

4. How is the image housed?

Daguerreotypes are typically found in a case sealed behind a thick piece of glass for protection, as the silvered image can be easily damaged.

The image’s case can tell part of the story as well. These cherished early photographs were usually placed in hinged wooden cases covered with embossed leather, and lined with silk or velvet facing the picture.

By 1852, an early resin-based thermoplastic case, which was called a Union case, was used.  Case manufacturing became a booming industry itself with various manufacturers producing beautifully molded case designs, based on the works of Old World Masters to contemporary artists, prints, and other works of art.  These cases can be just as collectible as the images they contain.

Rod MacKenzie’s collection will be sold in the American Furniture & Decorative Arts auction on October 30, 2011. Find out more about the stories behind the images, or view highlights from the collection.

13 thoughts on “How to Identify a Daguerreotype: 5 Considerations When Looking at Early Photography”