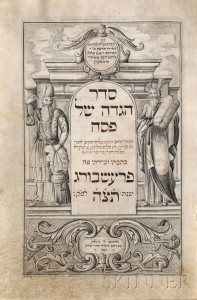 Each Passover, Jews around the world fulfill the commandment to retell the Israelites’ liberation from slavery in Egypt. In Hebrew, the word for this telling is Haggadah (plural: Haggadot), and the name of the ritual meal is Seder.

A Haggadah text supplies an outline of the order of the Seder along with poetry and songs. However, like much Jewish ceremonial art, each Haggadah may have its own distinct and fascinating characteristics. Jewish communities span the globe, and these different regions have developed their own interpretations of ceremonial art and texts over the past centuries. From the middle ages through the present day, there have been over 7,000 distinct versions of printed Haggadah. That fact amazes me! The text has also been translated into more languages, and revised more times, than any other Jewish book.

The Maxwell House Haggadah remains the most widely used version in the world, with over 50 million copies in print, but endless other options are well worth seeking out. While each Haggadah provides much of the same basic content, the diversity in decoration, illustrations, language, and commentary appeals to collectors searching out books from different time periods, geographical locations, and forms of artistic embellishment. 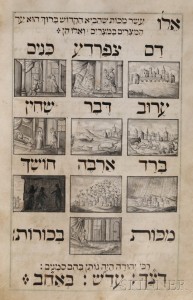 In a recent Fine Judaica auction, we were privileged to have an early 18th century manuscript and illuminated Seder Haggadah shel Pesach, completed in Pressburg (now Bratislava, Slovakia) in 1735 by the scribe Aaron Wolf Herlingen. Herlingen is regarded as one of the finest Jewish calligraphers of the 18th century, and his exquisite en grisaille illustrations followed the iconography of late 17th and early 18th century printed Amsterdam Haggadot that served as models and inspiration for most 18th century manuscripts. The work includes fine drawings of the Four Sons, Moses Found in the Nile, and miniature images from the song, “Chad Gadya.”

The Herlingen Haggadah is a truly stunning example, and it sold at auction for an impressive price of $450,000. However, antique haggadot are available at a range of price points, to fit the taste and budget of any avid collector. Also, the Haggadah isn’t the only important component to a Passover Seder. Skinner Fine Judaica auctions also offer Seder Plates, Matzah Bags, and more. What family heirlooms are part of your Passover Seder?