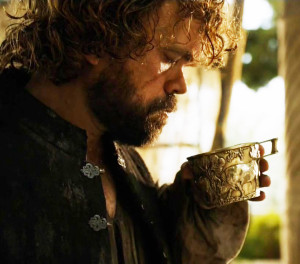 Tyrion Lannister, having just arrived in Pentos, is shown drinking from a small gold cup with a distinct handle and repoussé scenes of bulls. As I am sure many astute viewers realized earlier, the cup is actually a reproduction of an ancient original found in a Mycenaean tholos tomb at Vapheio in Southern Greece, which is currently housed in the National Archeology Museum in Athens.

The cup was discovered in 1888 by archeologist Christos Tsountas alongside another (one in each hand of the tomb’s occupant). Widely celebrated as masterpieces of the late Bronze Age, each gold cup is the same in terms of form and style of the repoussé decoration, but they are polar opposites in character. One cup features a man gently tying a rope to the leg of one bull as three other bulls graze peacefully. The second shows a bull attacking two hunters, while another bull is caught in a net and a third hunter flees the scene. Tyrion, interestingly enough, holds the more peaceful of the two. Speculate away! 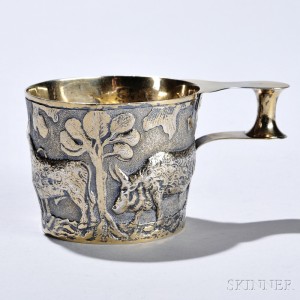 Skinner offered another such reproduction of these famed ancient originals (Lot 29) in the past European Furniture & Decorative Arts auction on April 8th. This silver-gilt cup was produced by George Nathan & Ridley Hayes, silversmiths who worked out of Chester, England. Nathan and Hayes produced a variety of works in the historic revival styles so popular throughout England and abroad in the late 19th and early 20th century. Skinner’s Vapheio cup is faithfully reproduced after the originals and features the same peaceful scene as the cup featured in the Game of the Thrones episode.

This silver mug sold in the April 8th auction for $431, with a tempting estimate of $200-300, perhaps you too could sip wine from a wonderful little piece of Greek revival silver during the upcoming Season 6 of Game of Thrones.

Come take a look at many other pieces of fine silver being offered during auction previews for our July auction on July 12 from 12PM-5PM and July 13 from 12PM-8PM.  The July European Furniture & Decorative Arts auction opens for bidding on July 14 at 10AM in our Boston Gallery.

One thought on “A Glimpse of History in Game of Thrones”