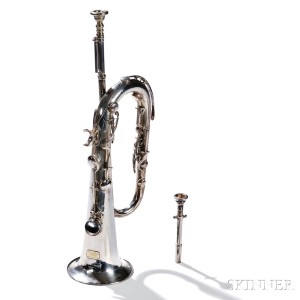 Boston has long been a hub of revolution, academic learning and culture, but for those of us enchanted by the siren songs of Cremona or Kalamazoo, Boston’s legacy as a center of musical instrument manufacture often goes unheard. In reality, for about a century through the early 1900s, Boston’s cobblestone streets were littered with makers’ shingles, from the smallest luthier’s workshop to the largest distributor’s factory, churning out instruments for the New World to rival those of the Old. To this day, the violins of A.W. White, banjos of A.C. Fairbanks, and guitars of Stromberg are highly coveted, but Boston’s musical heritage doesn’t only have strings attached.

In the mid-19th Century, even before their association with the music of the Civil War, brass bands were all the rage and Boston played its part. One of America’s first all-brass bands, the Boston Brass Band, was founded by Edward “Ned” Kendall, one of the last virtuosos of his chosen instrument, the keyed bugle. Although keys eventually lost the sonic arms race to the modern-day valve, Ned Kendall and his silver bugle, made by machinist and bandmate Henry Sibley, left an indelible mark in brass and stone, resonating outward from his final resting place in Boston’s Forest Hills.

In the early-20th Century, after a decade of service to another Boston institution, Wm. S. Haynes Co., master silversmith and flute maker Verne Q. Powell opened his own shop in the shadow of Symphony Hall on Boston’s Huntington Avenue. Much of Powell’s initial success was due to the early adopters of his instruments, and no endorsement was more influential than that of soloist and pedagogue William Kincaid, the Grandfather of the American Flute School, whose students chaired America’s great orchestras for decades.

Skinner is pleased to announce the homecoming of these two historic silver wind instruments by two of Boston’s premiere makers. Both are featured in our May 22 Fine Musical Instruments auction, Edward “Ned” Kendall’s keyed bugle (Lot 38) and William Kincaid’s Powell flute (Lot 37). Preview these and all other lots in the auction on Friday, May 20 from 12PM-7PM, Saturday, May 21 from 10:30AM-5PM, and on Sunday, May 22 from 9AM-11AM. The auction opens for bidding at 12PM in Skinner’s 63 Park Plaza Boston Gallery.