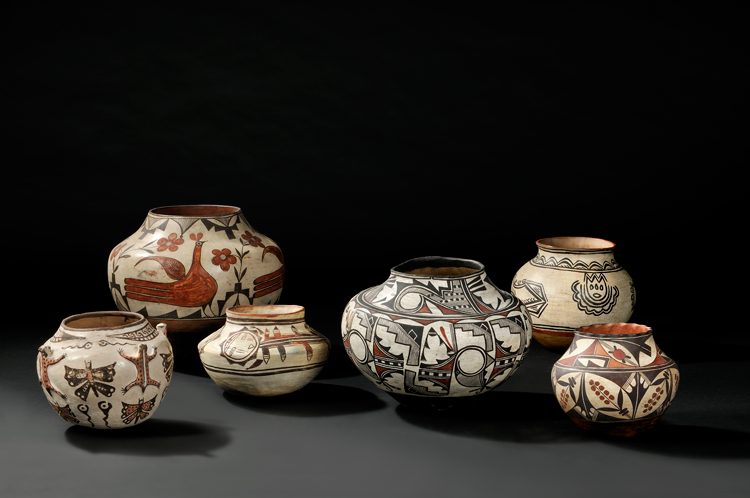 However, you can start collecting with smaller jars, which usually have similar decorations to the larger historic jars, but can be found for prices in the $500-$2,500 range. These jars are usually less expensive because they were originally made for the market, not for their own use.

Here are four things to look for that affect the value of Southwest pottery:

Big storage jars or dough bowls that were used on the pueblo can be quite valuable. Large, historic water jars, or ollas, often have wear on the rim from the ladle that was used to scoop out water. By the late 19th century, with the advent of the railroad, more pottery was being made for the market than for practical use in the pueblos. Often, these smaller, later examples can be much more affordable.

Which pueblo’s style and design appeals most to you? Acoma pueblo pottery is quite popular for its thin walls and elegant decoration. Collectors also love Polacca, a form of Hopi pottery from the second half of the 19th century. Some people prefer the charming human and animal figures made in Cochiti pueblo in the late 19th century, and others love the simple, floral or geometric designs of Santa Domingo, the Zia bird pots, or the Zuni heartline deer and rain bird jars.

It’s also important to recognize the names of the most famous Southwest American Indian potters, such as Maria Martinez, Nampeyo and her descendants, Margaret Tafoya, and Lucy Lewis. Because these artists were so prolific, their work has recently come down in value. It’s a good time to collect examples of their pottery.

Southwest pottery comes in many forms, from vessels to animal figures. People may collect non-traditional forms, like pitchers, but most collectors prefer traditional forms, including canteens, dough bowls, and ollas (water jars). However, the large, figural pieces made in Cochiti for the market are also quite popular and usually bring a high price. Make sure you also pay attention to condition. Collectors prefer pottery that hasn’t had extensive restoration. For an excellent book on historic pueblo pottery see: Pottery of the Pueblos of New Mexico, 1700-1940, by Jonathan Batkin or Two Hundred Years of Historic Pueblo Pottery: The Gallegos Collection, by Francis H. Harlow.

The February 2013 American Indian & Ethnographic Art auction will feature an extensive collection of pottery, including prehistoric Anasazi and Mimbres pottery and historic pottery from most of the Southwest pueblos. In addition to an extensive selection of Zuni pottery, the sale will offer fine Zia, Santo Domingo, Tesuque, Cochiti, and Acoma pottery. One highlight of the sale is a fine Polacca pot with unusual Kachina imagery. If you have questions about the auction or wish to consign American Indian art or artifacts, contact me at americanindian@skinnerinc.com.

5 thoughts on “Historic Southwest Pottery Guide: from Acoma to Zuni”