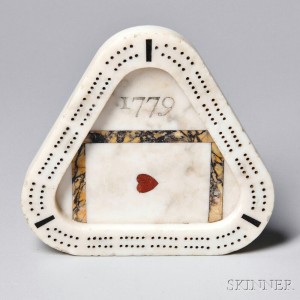 Cribbage was invented, reportedly by an Englishman named Sir John Suckling, in the early 17th century. Played with just a deck of cards, the counting board, and markers called “pegs” which fit into the board’s holes, the game is compact, simple to learn, and satisfyingly strategic. These appealing characteristics have resulted in the game’s remaining popularity over the 400 or so years since its invention. 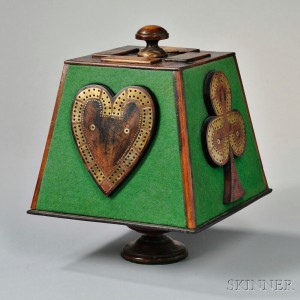 Those four centuries have given the cribbage community an extraordinarily long time to develop, design, use and market cribbage boards in almost every imaginable material, shape, and degree of complexity – and as such have long been an attractive category to collect. Skinner is pleased to offer a collection of Historic Games, an online-only auction running through Friday, May 20. The collector of this encyclopedic group recognized the breadth of his collection’s potential, and concentrated on gathering great examples in as many forms as he could. The result is an impressive group of some 300 cribbage boards, board boxes, and other objects of leisure, organized into nearly 150 auction lots.

Highlighting the auction are engraved and personalized boards in brass and inlaid wood from the 18th century, as well as intricately inlaid boards and board boxes from the first half of the 19th century, including Tunbridgeware examples. There are a half dozen boards and boxes made in whalebone by French prisoners-of-war around 1800 to 1815, and several carved scrimshaw-decorated boards made by North American Eskimo tribes. And there are nine 19th century games tables, many with compartmentalized drawers and folding tops permitting the play not just of cribbage but of checkers, chess, and backgammon, too.

The variety of forms means that while the collection will certainly appeal to collectors of cribbage boards in particular, there is a terrific opportunity for collectors of scrimshaw, folk art, early metals, 18th and 19th century woodenware, and high style Victoriana to add to their homes as well.

VIEW ALL LOTS OF HISTORIC GAMES