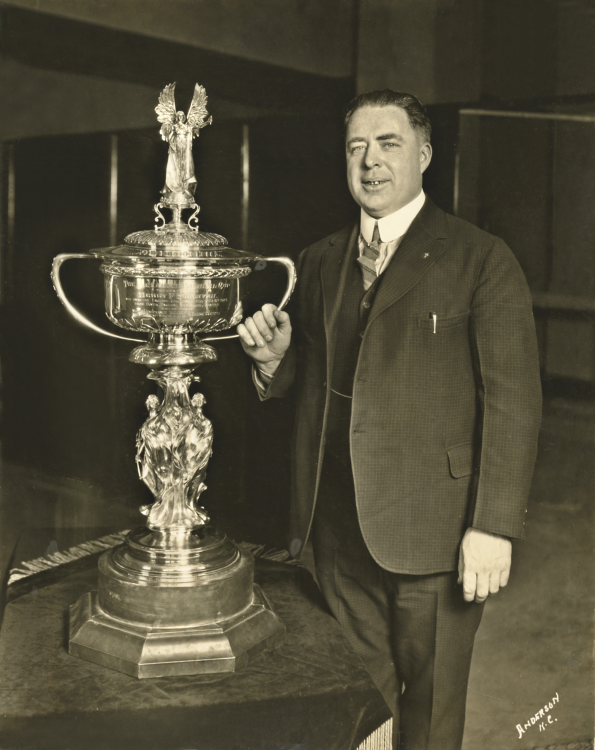 The press described it as “the greatest feat of endurance of all time.” Henry F. Sullivan had become the first American, and only the third person ever, to swim across the English Channel. His feat established the world’s endurance record and the world’s breast stroke record, and earned him a stunning silver trophy.

“The Alexander Channel Cup” will be sold on October 14th, 2011 in a Skinner Fine Silver auction.

The first successful swim across the English Channel was in 1875, by Englishman Matthew Webb. It wasn’t until 1911 that the second person managed the feat, Englishman Thomas William Burgess. It was his sixteenth attempt.

Sullivan, age 34, made it across on his seventh attempt, and it took him 26 hours and 50 minutes in what was described as “a sea almost unfit for boats.” The point-to-point distance is recorded at 22.5 miles, but due to the terrible conditions, it is estimated that Sullivan ended up swimming about 56 miles. For more about why someone would undertake a feat of this magnitude, see Part I: How to Earn a Three-foot-tall Sterling Silver Trophy.

Sullivan made his crossing in August.  According to the Channel Swimming Association website, the water temperature in the Channel during summer averages around 59 to 64 degrees. Hypothermia is a real threat to swimmers attempting the crossing. Imagine being in rough, choppy, 60 degree water for 26 hours, 50 minutes. That’s what Sullivan endured.

This is a staggering feat of endurance. Until March 6 this year, Sullivan held the record for the longest crossing. The record was handily beaten in 2011 with a time of 28 hours and 44 minutes.

When Sullivan completed his swim, he became an international sporting star. He toured Britain with this massive trophy before returning to the United States where he and the trophy went on tour for four years. Promotional materials about Sullivan reference the trophy, stating that it is “The world’s handsomest trophy… (for lobby display under police protection).”   Whoever carried the trophy to Sullivan’s appearances had to be relatively strong, as it weighs approximately 373.4 troy ounces, or nearly 26 pounds. It takes some muscle to pick it up. I know. I lifted it while I was cleaning it for a photography session! 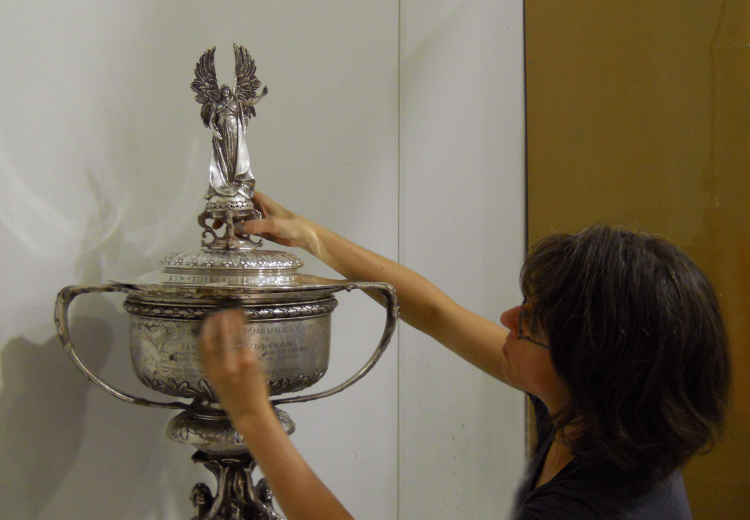 Polishing the trophy for its photo shoot

Sullivan pursued and achieved many other notable endurance swimming accomplishments. He resided in Lowell and Beverly, Massachusetts throughout his life, where he ran a successful business. Not surprisingly, this impressive, sculptural trophy, crowned by a figure of winged Victory, always held pride of place in Sullivan’s home.

As a sports hero, Henry F. Sullivan’s name may not spring immediately to most people’s minds, but his accomplishment is truly astounding—certainly for me, a fair swimmer at best, and someone who won’t even dip a toe in water colder than 75 degrees. Sullivan’s part in an era transfixed by the drive to conquer and achieve historic firsts is fascinating. The trophy is certainly worth seeing in person during the preview for the Fine Silver auction on Thursday, October 13 from 12 to 8 p.m. or Friday, October 14 from 12 to 4 p.m. (The Friday evening preview continues until 8 p.m. for the European Furniture & Decorative Arts portion of the auction). You can email me for more information at silver@skinnerinc.com.