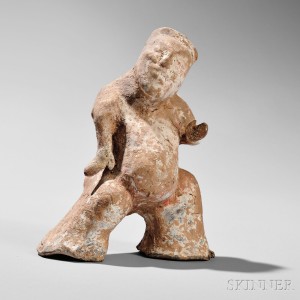 In China, ancient burial sites commonly included tomb pottery. China’s tradition of pottery-making began in ancient times well before the Han dynasty, but by this time, improvements to pottery-making techniques allowed for extensive production of items for both daily and ceremonial use. These sophisticated new techniques eventually led to the three-colored glazed-ware (sancai) of the Tang dynasty as well as low-fired glazed-wares of the Ming and Qing dynasties.

Sculptural tomb pottery pieces symbolized items the deceased person would need in the afterlife: animals, dancing figures and musicians, houses, granary jars, oil lamps, horses and other items from daily life. The custom continues to this day; traditional burial ceremonies in China may include the burning of replicas of cars, houses, jewelry, and other valuables that belonged to the deceased.

As the market for Chinese works of art soars, collectors in China and around the world are beginning to take notice of the importance and beauty of tomb pottery. These low-fired, earthenware ceramics feature natural ash and applied lead glazes. The simplicity of the pottery forms, the shine of the iridescent glazes, and the humor imbued in the figures and animals all appeal to a modern eye and attract the attention of both beginning and experienced collectors.

International scholars of ancient pottery are doing ground breaking work on understanding early Chinese cultures by studying the pottery unearthed in the many excavations occurring today in China. 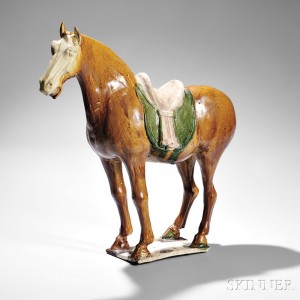 The Asian Works of Art auction in Boston on September 16, 2016 offers a large selection of tomb pottery dating from prehistoric Majiayao and Banshan cultures through the Tang dynasty.  The bold, painted abstract patterns on the Majiayao and Banshan ceramics appeal to the modern eye.  There are many fine examples of Han figures of soldiers (Lot 68), entertainers (Lot 73), villages (Lot 56), and animals, such as, the exceptionally large cow (Lot 65) and the dog (Lot 78).  Among the fine examples of Tang pottery are the sancai-glazed caparisoned horse (Lot 57) and the horse and rider with dog and bird (Lot 63).

Two other exceptional pieces from the Tang dynasty not for the tomb are the pair of white marble lions with dragon heads (Lot 84).  Such reclining beasts were placed at the entrance of bridges to ward off evil spirits for safe travel and the pair of gilt-bronze bottle vases (Lot 105).

J. Lally, well-known dealer of fine Chinese works of art based in New York, was asked about areas to collect. He answered that tomb pottery is growing in popularity, and I agree that these objects will likely continue to attract new buyers. Yet the total supply of authentic tomb pottery is not increasing — it’s unlikely that very many more ancient Han tombs will be unearthed. As Chinese and Western collectors alike come to appreciate the importance, beauty, and rarity of Han tomb pottery, demand will outpace supply and prices will probably climb.

If you are interested in Chinese tomb pottery, now is the perfect time to attend an auction preview and ask questions. Join us in Boston for the free public preview April 24th through 27th.