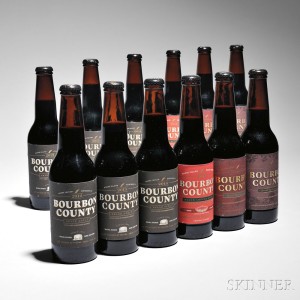 Founded in 1988 by John Hall, Goose Island has been at the forefront of the craft beer boom in the United States. Starting from scratch at a time when “microbrew” wasn’t part of everyday lexicon, Goose Island started to push the boundaries and challenge the American beer drinker’s palate with hop-forward ales and a contagious passion for expanding the horizons of what defines American beer.

In 1992, Hall created what is arguably the first truly American style of beer since Prohibition: bourbon barrel aged beers. While fermenting alcoholic beverages in barrels is quite common (see: the wine and spirit industries, along with many traditional breweries throughout Europe), using freshly dumped bourbon barrels offers some distinct advantages. First, the wood has soaked up a fair amount of bourbon, and the medley of bourbon with beer creates a harmony that is arguably greater than the sum of its parts. Second, while fresh oak barrels lend tannin and vanillin to neutral spirits and wines, that effect can be quite harsh for beers. By using used barrels, most of the harsh woodiness has already been stripped by the previous inhabitant, so the barrel offers a measured amount of character to beer. Finally, since bourbon is required to be aged in new American oak, there is a reliable source of new barrels and the barrels will still have plenty of “life” in them from aging just one spirit.

Over the years, the brewers of Goose Island have expanded the barrel program from exclusively bourbon barrels to include wine barrels and rye whiskey barrels. Each of the beers offered here have seen some amount of barrel treatment.

Goose Island Bourbon County Brand Stout: the beer that started a barrel-aging revolution, this is a high-octane stout typically in the neighborhood of 13-15% ABV aged in freshly dumped bourbon barrels. The beer oozes with chocolate, vanilla, caramel and sweet smoke.

Goose Island Bourbon County Brand Coffee Stout: a variation on the bourbon barrel aged stout, this version is aged in the barrels with coffee beans from Intelligentsia Coffee Roasters, adding an intense coffee layer to the already complex flavor profile.

Goose Island Vanilla Rye Bourbon County Brand Stout: another twist on the original, this variation uses rye whiskey barrels to age the stout, adding a spicy dimension, and balances it out with vanilla beans in the barrel, resulting in an unctuous, dizzyingly rich beer.

The Sisters: these are all variations of traditional Belgian ales, with wild yeasts lending tartness, wine barrels offering a subtle woodiness and light tannins, and fruits adding, well, fruity notes. While the Bourbon County series gives a nod toward the spirits world, these beers bridge the gap between beer and wine.

It is our pleasure to offer the following four lots (Lots 209 through 212) directly from the cellars of Goose Island for our upcoming Fine Wines Auction (#2852B) on October 20th in Boston. The brewery has generously offered to donate the proceeds of sale to benefit the ALS Therapy Development Institute, the world’s first and largest nonprofit biotech 100% focused on developing treatments for ALS.