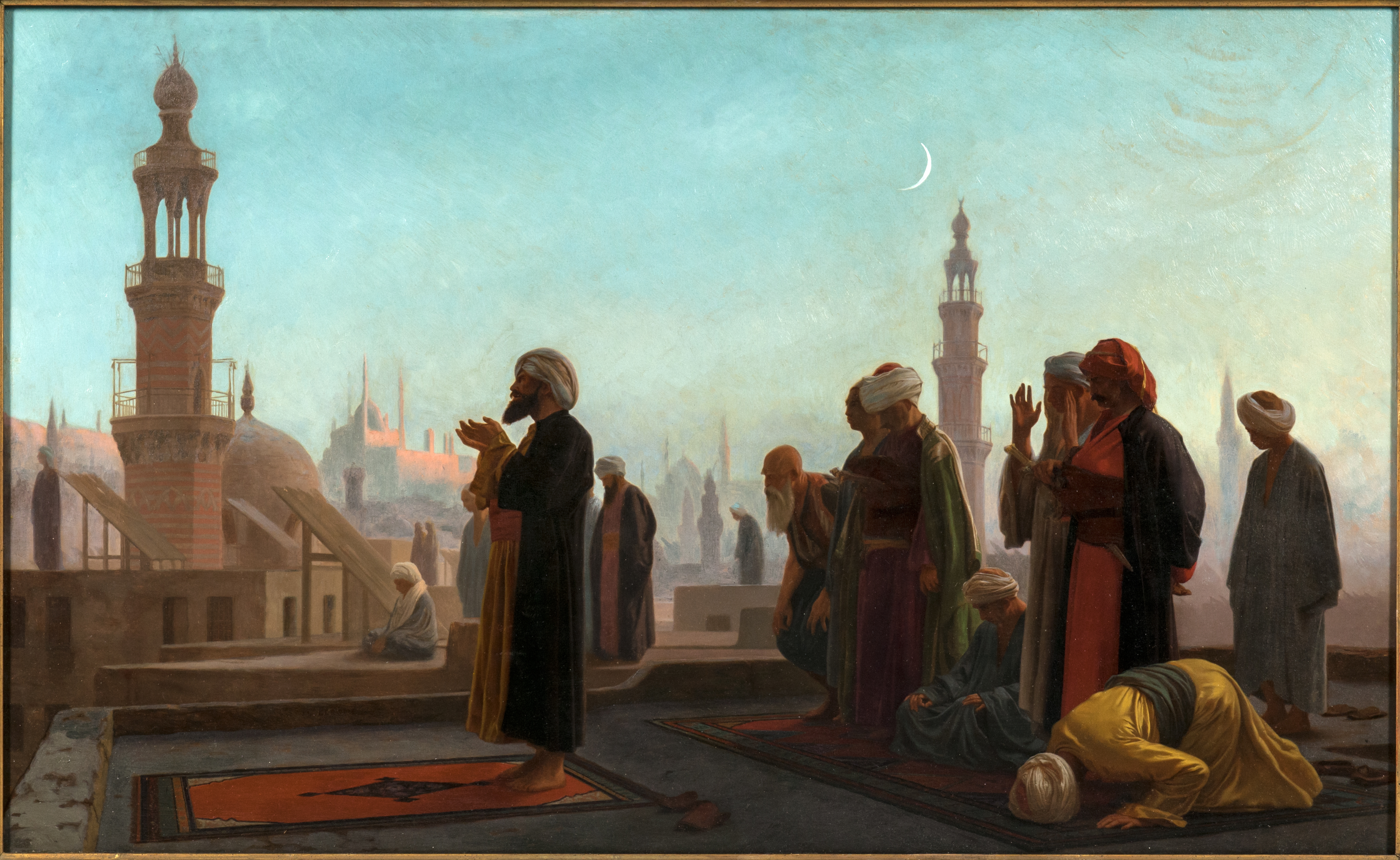 A newly-rediscovered oil painting by Jean-Léon Gérôme, Evening Prayer, will be offered by Skinner in the American & European Works of Art auction on September 21, 2018. The painting has been authenticated by Dr. Emily Weeks, whose essay follows below. A full description of the work with provenance, along with Dr. Weeks’s essay with notes, will be available online and in the fully-illustrated printed catalog in early September. Please contact the paintings department at paintings@skinnerinc.com or 508-970-3206 for further details. The printed auction catalog may be purchased on the Skinner website or by phone order at 508-970-3234.

In the 1860s, Gérôme began a series of pictures depicting Muslim men at prayer.  These would become a signature theme of the artist’s, and among his most popular Orientalist works.  The present painting, Evening Prayer, holds a special place within this important group.  A “perfected” version of one of Gérôme’s most evocative compositions, with all of the technical hallmarks and intellectual nuances of his art, it has recently been confirmed as an original work by his hand and returned to the artist’s oeuvre.

Gérôme’s path to Orientalism began in 1856 when he traveled to Egypt for the first time.  (Earlier in his career, he had made his name with light-hearted Néo-Grec genre scenes and archaeologically exacting images of the classical past.)  In Cairo, he accumulated a virtual library of souvenirs, costumes, and local crafts, as well as photographs, sketches, and drawings, which served as inspiration for his studio works. Subsequent trips to the region made during the 1860s and 1870s expanded his repertoire of subjects, confirming his talents as an ethnographer and his reputation as a privileged witness to all aspects of Middle Eastern life. 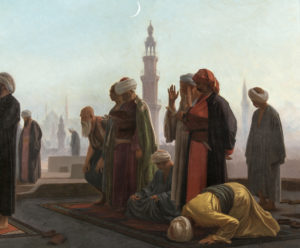 In the present work, Gérôme depicts the daily maghrib, or evening prayer, performed on the housetops of Cairo. In the background, the distinctive skyline of the city is visible, with the Mosque of Muhammad Ali and the Madrasa of Sultan Hasan helping to identify the geography of the site. Gérôme’s figures are executed with comparable documentary care: The men face east, towards Mecca, as the crescent moon and direction of the waning light suggest.  They demonstrate each of the ritual postures associated with the prayer, from the initial standing qiyam to the last prostrate sajda (fig. 1).  The motivation for this encyclopedic view was likely a favorite reference of Gérôme’s: Edward William Lane’s An Account of the Manners and Customs of the Modern Egyptians, first published in London in 1836, also described these poses, in pictures and in text.

Despite these glosses of realism, Gérôme’s image is far from true.  A minaret from the Madrasa of the Amir Sarghitmish (1356), placed prominently on the left, should be miles from this scene, and the rooftop wind scoops are likewise curiously placed.  (To catch the prevailing winds that sweep through Cairo, they should be facing north.)  Several of the men, moreover, inspire a strong sense of dejà vu.  They reappear in others of Gérôme’s compositions, in various contexts and dress.  Rather than a sign of ignorance, however, or a thoughtless oversight, these were deliberate choices by the artist, made for aesthetic effect. 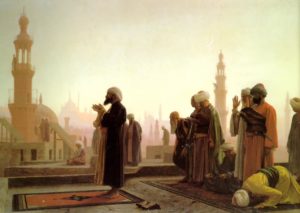 Such artistic liberty did not diminish the overall popularity of Gérôme’s Middle Eastern works, nor jeopardize their worth. At least three painted versions of the present subject are known, and numerous reproductions and copies were made during the course of the artist’s career – a testament to its success. The original painting in the Hamburger Kunsthalle, exhibited at the Paris Salon in 1865, shares many of the same features with the present picture, including its formidable size (19 ½ x 32 in. [49.8 x 81.2 cm]) (fig. 2).  It is the differences between the two, however, that are most important here: In the present work, the absence of background figures and the substitution of a striking man in red – a favorite model of the artist’s – serve to focus all attention on the devotions of the group, and the poetry of prayer.

In the nineteenth century, making versions of a favorite or highly coveted subject was the standard practice of many artists, and held a specific societal value.  Those without the resources to purchase a popular Salon painting could, by these means, enjoy similar works in their own homes, particularly through the production of a reduction, or smaller version of the piece. For those who wished for a grander addition to their well-hung walls, a répétition was the answer to their needs.  This was understood to be a later version of a painting, of roughly the same size.  Owing to a few compositional differences – a requisite of this type – the répétition was considered to be an original and costly work of art.  As Patricia Mainardi explains: “The correct term for an artist’s later version of his own theme … was . . . répétition, the same word used in performance for a rehearsal. In performance, we never assume that opening night is qualitatively better than later presentations – first performances are, in fact, usually weaker than subsequent ones, which gain in depth from greater experience and familiarity with the material,” (“The 19th-century art trade: copies, variations, replicas,” The Van Gogh Museum Journal 2000, pp. 63-4.).  Evening Prayer, then, the last of the three painted versions of this subject to be made, and the only répétition that is known, may be interpreted as Gérôme’s most valuable and profound rendition of this beloved theme. 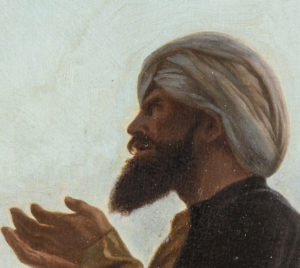 The techniques that Gérôme employs throughout this composition exhibit the trademarks of his style, as does the distinctive signature located along a background ledge. The application of paint around the head of the Imam is particularly noteworthy, as it offers a glimpse into the artist’s working method.  Here, Gérôme simultaneously applies fresh paint to both the figure and the ground, allowing him to balance the painting’s overall tones and avoid the hard-edged outlines of others’ academic style (fig. 3).  The consequent appearance of this painted passage and across the surface of the picture as a whole, as a seamless, luminous sheet of glass, became identified closely with the artist, and with nineteenth-century Orientalism as well.

The appearance of Evening Prayer by 1870 in two prominent private collections in England and, fifteen years later, on the East Coast of America, was in keeping with the history of many of Gérôme’s best-known works. In 1859, Gérôme signed a contract with the French publisher and art dealer Adolphe Goupil (1806-1893).  Goupil’s calculated marketing of Gérôme’s works, through both the sale of originals and affordable, mass-produced reproductions, guaranteed their widespread distribution, and the growth of his international success. The industrial and commercial booms of the nineteenth century also had a critical role to play. They generated a new group of art purchasers and patrons in these countries, who were eager to prove the sophistication of their nouveau riche tastes.  Scenes of Middle Eastern prayer such as this one offered a broad and somewhat ironic appeal: In addition to reflecting – despite their foreign guise – the familiar moral principles that these new collectors were anxious to uphold, they could also offer hope and comfort at a time of rapid change.  As the corruptive influences of capitalism were beginning to be recognized and the complexities of modern life were starting to take their toll, the idea of a pure and unquestioned faith was doubtless reassuring.  Gérôme’s Evening Prayer then, a window into a distant and exotic world, may also, in this context, be read as the final solemn sermon to one closer than it seems.

This catalog note was written by Emily M. Weeks, Ph.D.

Emily M. Weeks received her Ph.D. from the Department of the History of Art at Yale University in December 2004. Currently, she is an independent art historian and consultant for museums, auction houses, and private collectors in America, Europe, and the Middle East. Her areas of expertise include Orientalism and nineteenth-century British and European visual culture; she is also the acknowledged expert on the artist Jean-Léon Gérôme. Dr. Weeks has lectured widely on these topics, both in the United States and internationally. Dr. Weeks has also organized and contributed to a number of critically acclaimed exhibitions, including The Lure of the East: British Orientalist Painting, 1830-1925 (2008-2009; organized by Tate Britain). Her extensive list of publications includes contributions to scholarly anthologies, academic and popular journals, books on Orientalist art, numerous exhibition and auction catalogues, and content for museum websites. Dr. Weeks’s first book, Cultures Crossed: John Frederick Lewis (1804-1876) and the Art of Orientalism, was published by Yale University Press in 2014. A book on Orientalist picture frames and a revised catalogue raisonné for Gérôme are forthcoming.