This post is republished with permission from the blog Gem Gossip: Endless talk of all things sparkly 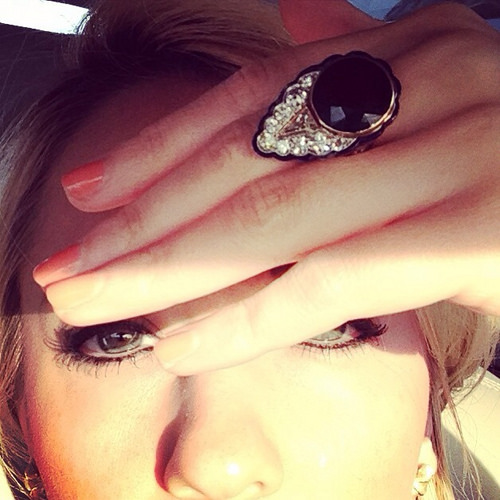 Getting this ring was truly a heart-stopping moment, both when opening it up and seeing it for the first time, as well as live bidding at auction. This ring was acquired through March 18th’s Fine Jewelry Sale at Skinner Auction House in Boston. I had browsed the lots in order to write a piece about the upcoming auction, only to spot this ring and fall in love.  It was then I decided to not just write about the auction, but become a bidder myself!

The ring is 14k yellow gold, set with a large round brilliant garnet, measuring about 14mm in diameter! The diamonds, which are a combination of Old European cuts and a few full cuts, along with a triangular cut, all form a “Comet” shape. Blue enameling outlines the perimeter and along the sides. The age of the piece is difficult to pinpoint. It almost looks as though it is late 1800s or turn-of-the-Century, however the futuristic shape and triangular cut diamond are throwing me off. Victoria Bratberg, Director of Jewelry for Skinner, says that “the ring is composed of diamond elements from the 1920’s that were reconfigured with later added diamond-set shoulders probably in the 1950’s.” This makes more sense considering all of the elements within the ring. It hails from a private New York collector and I hope they will know I will treasure it for many years to come! 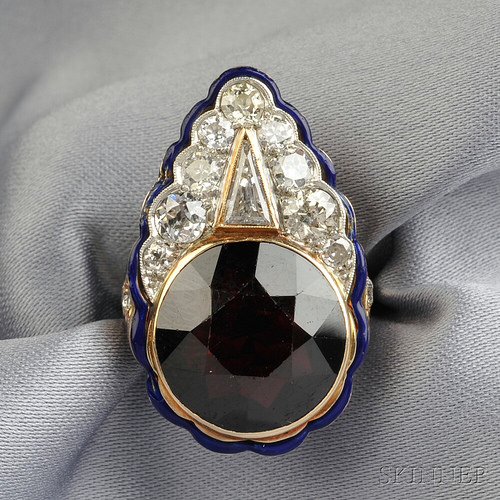 The March 18th Fine Jewelry auction at Skinner was quite intimidating for a buyer like myself. I diligently watched as many of the first few pieces sold quickly to aggressive bids. Three rare pieces of jewelry by Pablo Picasso, each on the block for the first time, stole the show! Estimated hammer prices ranged from $15,000-20,000 so it was an incredible showdown to watch as all three sell for $386,250 total and most importantly, all selling to the same buyer!

All this happened before my beloved Garnet ring was up on the auction block, and I have to admit, I was a little aprehensive at that point. Plus, bidding online from Skinner Live! leaves you unaware of what it looks like over in Boston, where all the action is taking place. The stars aligned during the quick bidding in lot 282, and I was so excited to be the last bidder on my second or third bid (can’t remember because of the adrenaline rush)! My experience with Skinner has been nothing but positive! I am looking forward to taking part in more jewelry auctions in the future and maybe even someday visiting their facility in Boston!

View the catalog for the June 10, 2014 Skinner Fine Jewelry auction.