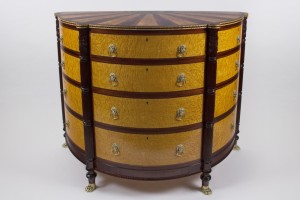 The Fuller Craft Museum is brimming with excitement as we have recently launched this year’s biggest exhibition: Made in Massachusetts: Studio Furniture of the Bay State. We are proud to present this furniture show as our contribution to the paramount Four Centuries of Massachusetts Furniture, a collaboration that unites eleven institutions in a celebration of furniture-making in the Bay State.

This exhibition highlights the contemporary studio furniture movement in Massachusetts. Though this movement began in the 1970s, artistic developments in the early part of the 20th century, such as the Arts & Crafts movement, influenced explorations in furniture that continue to dazzle audiences today. In addition, later pioneers of the craft, such as the famed Wharton Esherick, Wendell Castle, Mary Gregory, Sam Maloof, and James Krenov, left their footprint on contemporary furniture. 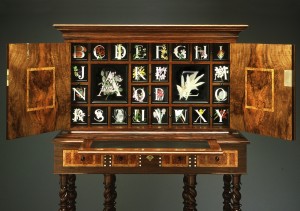 However, the principal driving force behind the captivating studio work of the last 40 years is arguably the assortment of educational institutions in the Northeast. These schools have produced first and second generation “new wave” furniture masters. Many of these furniture makers in the exhibition either attended or taught at the Rhode Island School of Design (Rosanne Somerson, Eck Follen, Dale Broholm), Boston’s North Bennet Street School (Miguel Gómez-Ibáñez, Paula Garbarino, Alex Krutsky), and the Boston University/UMass-Dartmouth Program in Artisanry (Tom Loeser, Alphonse Mattia, Jere Osgood). 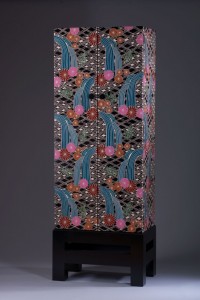 Presented in three galleries, the show displays a spectrum of furniture perspectives that include form, material, and historical context. Some of the works display a rethinking or refinement of classic forms. Great examples include Harold Ionson’s elegant recreation of a Thomas Seymour commode, Lance Patterson’s handsome interpretation of a 17th century Thomas Tompion clock, and Philip C. Lowe’s detailed Samuel McIntire-style side chair.

The exhibit also provides insight into the wonderful versatility of wood as a material. Examples include masterpieces in marquetry and inlay (Silas Kopf’s Aquarium, Wendy Stayman’s Ebony end tables, Alex Krutsky’s Spice Box), explorations in pattern work such as the bold and colorful Waterfall cabinet of Jenna Goldberg, and delicate hand carving as seen in the Window Seat Bench by Kristina Madsen.

Many studio furniture artists have explored alternative materials such as steel, plastic, and textiles. Wonderful examples in our show include the sprawling steel Long Lounge of Eck Follen, the cast urethane element in Bart Niswonger’s Ball Side Table, and the playful My Mummy Made Me Do It from Tommy Simpson.

Open through February 9th, 2014, Made in Massachusetts: Studio Furniture of the Bay State is a stunning exposition of conceptual and technical practices of 20th century studio furniture masters. We are delighted to be a part of the Four Centuries of Massachusetts Furniture project, and have organized a series of lectures and other events to coincide with this sensational showcase. Please visit http://www.fullercraft.org for more information. 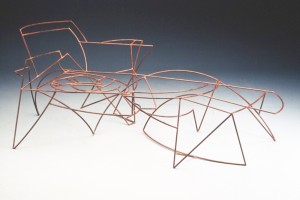 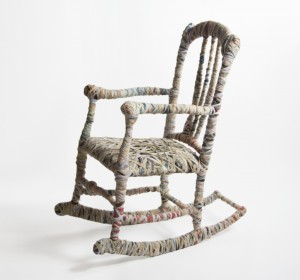