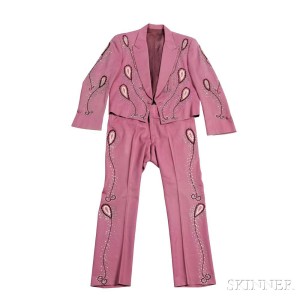 Whether an icon of the stage and screen or a country singer on tour for the first time, Nudie’s Rodeo Tailors in North Hollywood, California, was a destination for the hip and aspiring alike. Born Nuta Kotlyarenko (Kiev, 1902), Nudie Cohn plied his trade on New York City showgirls before setting his sights on the stars of the Golden West. He wrapped Elvis in gold lamé and John Lennon in Western wear; he put rhinestones on cowboys and cowboy boots on rock stars. From Nashville to Beverly Hills, anyone who was anyone owned a Nudie suit, and Little Jimmy Dickens owned many.

A standout Nudie Suit in the auction is Lot 362 (estimated between $3,000-5,000), a robin’s egg blue jacket and pants with orange underlay and piping, and matching orange felt cowboy hat and leather boots.

Manuel Cuevas worked closely with Nudie Cohn and would later become head tailor, head designer, and eventually partner of Nudie’s Rodeo Tailors in North Hollywood. Known as the “Rhinestone Rembrant,” he’s often credited as the man who put Johnny Cash in black. Many of the suits in this upcoming auction were touched by Manuel, including Lot 378, a mauve suit, embroidered with peacock feather motif and embellished with rhinestones, featured on the catalog cover. 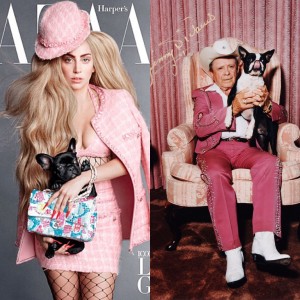 Left: Lady Gaga on the cover of Harper’s Bazaar Right: Detail of the Little Jimmy Dickens photo included in Lot 378

In 1975, Manuel opened his own shop, Manuel Couture in North Hollywood. Most recently, he has designed pieces for pop icon Lady Gaga. With the release of her new album, Joanne, Lady Gaga has aesthetically channeled the greats that came before her by enlisting the designs and workmanship of Manuel while adding her own twist. Even while appearing on Saturday Night Live on October 22, she paid homage to some of the iconic styles pioneered by Nudie and Manuel. The rhinestone wrapped cowboy hat she wore is reminiscent of Lot 520, which was designed by Nudie. She even posed on the cover of Harper’s Bazaar with her dog Asia – an echo of the catalog cover for our upcoming Vintage Guitar and Memorabilia auction. 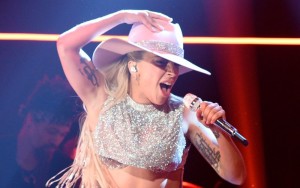 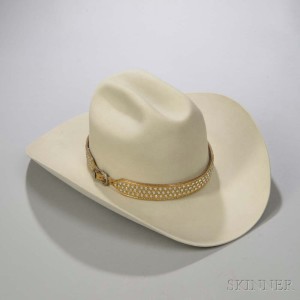 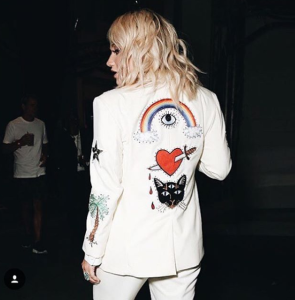 While Manuel continues his legacy in his own shop, Nudie’s family continues to outfit celebrities in the designs that made him and the stars that wore them stand out. Most notably, Kesha has been dressed quite often by Nudie’s studio. This past year, the pop artist wore a purple Nudie suit to the Billboard Music awards. She also wears many of their designs while performing, including her tribute performance to Bob Dylan. She wore a white custom made suit emblazoned with rhinestones and patches: a rainbow over an eye, a heart with a knife through it and a black cat with a third eye tell the story of having been betrayed but eventually learning to trust in your intuition.

One of Nudie’s designs for Kesha made the news, but not for its appearance on stage or on the red carpet. A custom embroidered suit jacket, which features rainbow fringe and a giant tiger on the back with the Iggy Pop-inspired phrase, “Real wild one,” was stolen from her dressing room. She posted a video to Instagram pleading with fans to help her locate her jacket – and it worked. She thanked her fans in another video, stating “Without you, I would not have this jacket. And without this jacket, there would be no rock and roll tonight, so basically you have saved rock and roll, and I am forever grateful.”

With today’s pop stars adopting the Nudie Suit style it is clear that Nudie Cohn’s rhinestone legacy remains a touchstone of performance culture. Come see his designs in person with over 25 lots of Nudie Suits, Shirts, Hats and Boots during the auction previews on Thursday, November 3 from 12-7PM, Friday, November 4 from 10:30AM-5PM and Saturday, November 5 from 9AM-10:30AM.