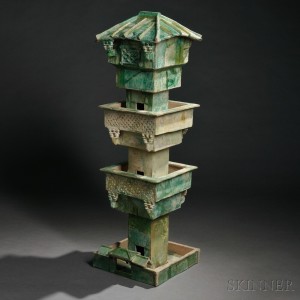 In China, during the Han dynasty (206 BC through AD 220), burials commonly included tomb pottery. China’s tradition of pottery-making began in ancient times well before the Han dynasty, but by this time, improvements to pottery-making techniques allowed for extensive production of items for both daily and ceremonial use. These sophisticated new techniques eventually led to the three-colored glazed-ware (sancai) of the Tang dynasty as well as low-fired glazed-wares of the Ming and Qing dynasties.

Sculptural tomb pottery pieces symbolized items the deceased person would need in the afterlife: animals, dancing figures and musicians, houses, granary jars, oil lamps, horses and other items from daily life. The custom continues to this day; traditional burial ceremonies in China may include the burning of replicas of cars, houses, jewelry, and other valuables that belonged to the deceased.

As the market for Chinese works of art soars, collectors in China and around the world are beginning to take notice of the importance and beauty of tomb pottery. These low-fired, earthenware ceramics feature natural ash and applied lead glazes. The simplicity of the pottery forms, the shine of the iridescent glazes, and the humor imbued in the figures and animals all appeal to a modern eye and attract the attention of both beginning and experienced collectors. 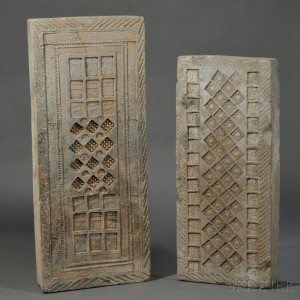 The Asian Works of Art auction in Boston on April 26th and 27th, 2014 includes many fine pieces of Han-style tomb pottery from the Estate of Peter L. Rosenberg. Rosenberg likely purchased these items on his buying trips to China in the early 1980s. Two of my favorite examples are a stunning example of a large water tower with traditional Han architectural details (Lot 303, Estimate $3,000 to $4,000) and a tall, Eastern Han Hu-shaped jar with two “taotie” masks featuring nose rings molded to the shoulders and an exceptional pale-green iridescent overall glaze (Lot 308, Estimate $700 to $900).

Other excellent pieces include a depiction of four roosters (Lot 287, Estimate $500 to $700) and a sculptural scene showing a Han kitchen with a seated figure tending the hearth (Lot 291 Estimate $500 to $700). A globular jar with natural ash glaze and two stylized molded animal-head handles (Lot 314, Estimate $700 to $900) serves as a fine example of proto-greenware. Finally, two hollow, molded wall tiles with impressed decorations (Lot 306, Estimate $800 to $1,200) resemble a pair of pottery tiles that sold at Christie’s for over $8,000 in March, 2014. 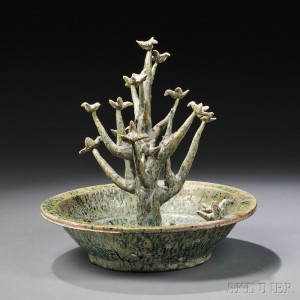 The April auction also includes Han-style pottery from other collectors. The piece we’re most excited about is a rare sculpture of a tree (Lot 699, Estimate $5,000 to $7,000). Small birds rest on the tree branches, and the tree grows from a basin that represents a moat. The current owner purchased the piece at a Christie’s auction on December 10, 1984.

During Asia week last month, J. J. Lally, well-known dealer of fine Chinese works of art based in New York, was asked about areas to collect. He answered that tomb pottery is growing in popularity, and I agree that these objects will likely continue to attract new buyers. Yet the total supply of authentic tomb pottery is not increasing — it’s unlikely that very many more ancient Han tombs will be unearthed. As Chinese and Western collectors alike come to appreciate the importance, beauty, and rarity of Han tomb pottery, demand will outpace supply and prices will probably climb.

If you are interested in Chinese tomb pottery, now is the perfect time to attend an auction preview and ask questions. Join us in Boston for the free public preview April 24th through 27th. 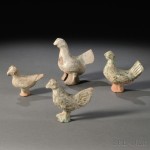 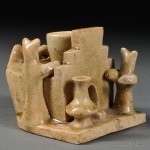 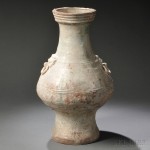 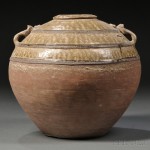 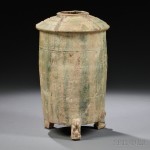 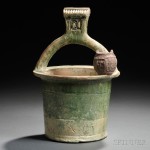