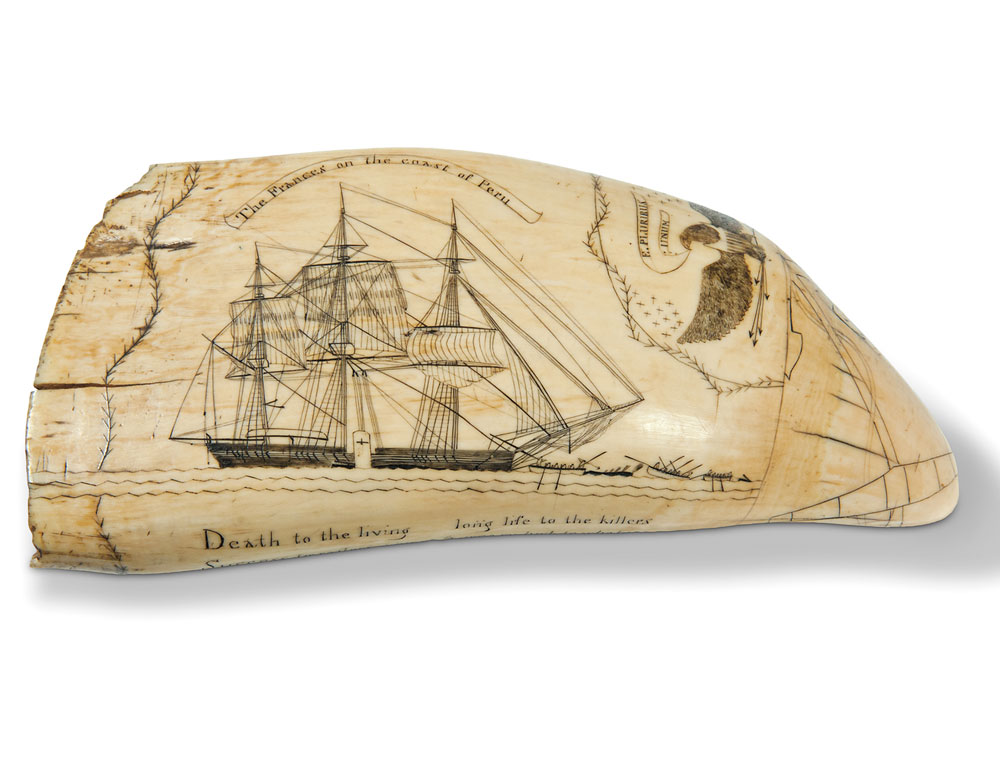 In a biographical note that appears in the Frederick Myrick of Nantucket Scrimshaw Catalogue Raisonne (Kendall Whaling Museum, Sharon, Massachusetts, 2000), in which this tooth is pictured, Stuart Frank writes that Frederick Myrick is “undoubtedly the most famous scrimshaw artist…[and his] work will likely always remain a cornerstone of any scrimshaw collection.” Myrick’s work, according to Frank in Ingenious Contrivances, Curiously Carved: Scrimshaw in the New Bedford Whaling Museum (David R. Godine, Boston, 2012), is collectively known as “…Susan’s Teeth. Today, connoisseurs regard Susan’s Teeth as the benchmarks of any collection.” (p. 22).

Myrick is known to have produced approximately thirty-five teeth, most of which do indeed show the whaleship Susan, on which he spent three years during a voyage to the Pacific. His teeth, according to Frank, are “each engraved on both sides, each with two proficient portraits of the same ship, whether whaling, cutting in, or homeward bound, and each with spread eagles, anchors, flags, and mottos. They are very much alike; and yet each one is unique, with the same components used over and over again, but differently deployed in each case, in conformity with the contour of each of the individual teeth.”

While there is no record of Myrick’s voyage on the Susan intersecting with the voyage of the Frances, the Southern Pacific Ocean was a hotbed for whaling, and the coastal regions and port cities of Peru allowed for interaction between ships and their crews. 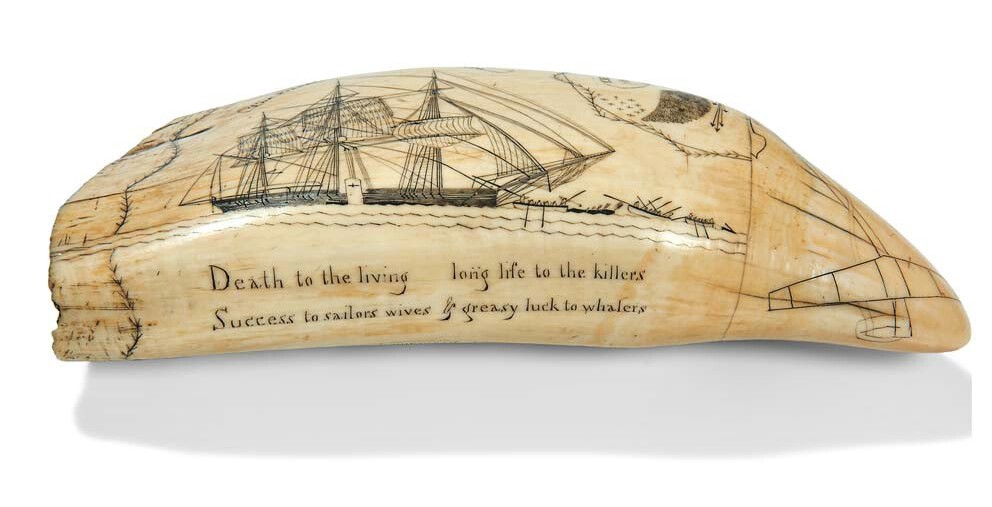 Notable on this tooth is the inscribed verse “Death to the living long life to the killers/Success to the sailors wives & greasy luck to whalers,” a now-famous motto which reflects the dark reality of the ordinary Nantucketer’s life. Nathaniel Philbrick, the author of In the Heart of the Sea, tells us “despite the bravado of this little ditty, death was a fact of life with which all Nantucketers were thoroughly familiar. In 1810 there were forty-seven fatherless children on Nantucket, while almost a quarter of the women over the age of twenty-three had been widowed by the sea.”

Join us for a lecture by Stuart Frank, The Hallowed Halls of Scrimshaw, at Skinner’s Boston Gallery at 6PM on Friday, March 3.

One thought on “Frederick Myrick: The Most Famous Scrimshander”