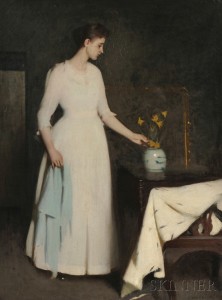 Previewers at Skinner’s American & European Works of Art auction in January will have something special in common with the throngs of visitors at the World’s Columbian Exposition in Chicago in 1893. What could that possibly be?

As department specialists were researching paintings being offered in our January 23rd auction, we discovered that two of our American paintings had hung together 122 years earlier…in the Palace of Fine Arts at the World’s Columbian Exposition. This prestigious, juried exhibition, featuring the best contemporary painters of the late 19th century from home and abroad, was a highlight of the world’s fair held to commemorate the 500th anniversary of the arrival of Columbus in the New World.

Frank Weston Benson (American, 1862-1951) exhibited three oil paintings at the Exposition. One, titled Figure in White  (Lot 495, Estimate $350,000—$550,000). The model for Figure in White is said to be the artist’s sister, Georgiana. The artist kept the painting for his personal collection, where it hung in the dining room of his family home in Salem, Massachusetts. The work was inherited by Benson’s children and subsequently was donated to the Salem Public Library, one of Benson’s favorite spots. The large portrait, showing a beautiful young woman at ease within a handsome interior with spring flowers in a Chinese vase, was a quintessential example of Boston School painting. The setting is refined, with a draped chair in the foreground and an ornate gold frame in the shadows in the back. The work still bears a paperboard plaque on the reverse of the frame stating “MEDAL/World’s Columbian Exposition.” 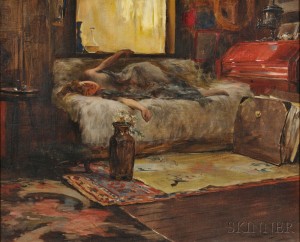 Sunlight in the Studio by Irving Ramsey Wiles (American, 1861-1948) was also exhibited at the World’s Columbian Exposition (Lot 490, Estimate $100,000—$150,000). In a letter regarding this painting, Wiles scholar Geoffrey Fleming noted that the work had been described in detail in The Nation when it was first shown at the winter exhibition at the National Academy of Design in December, 1888. Wiles exhibited six oil paintings at the Exposition, among which was A Girl in Black, lent by the artist’s mentor and friend William Merritt Chase, and The Sonata, the latter being illustrated in the official exposition art catalog. Wiles received a bronze medal at the World’s Columbian Exposition, but research thus far has not revealed exactly which of his works was so honored. In the Wiles painting, the subject is truly the golden light filtered through the window shade which illuminates the many handsome decorations throughout the beautifully appointed studio.

With their distinctive beauty and gentility, combined with their subtle light and impressionist brushwork, these two paintings, now reunited for a short time, illustrate what made the American Impressionist painters so popular then and today.