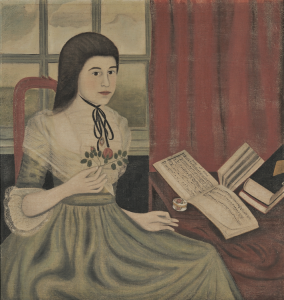 When you look at modern and contemporary art, it’s clear that there is a thin line separating the questions, “what is Art?” and “what is Folk Art?” Many academically trained artists have looked to folk art for inspiration. Picasso was inspired by African carved masks and it cannot be disputed that Elie Nadelman drew from the American folk art tradition. Contemporary artist Michael Lin decorated the streets of Vancouver with oversized examples of folk textiles for the 2010 Winter Olympics. Through his eyes, we view these vernacular artifacts differently.

So why does the Folk Art designation exist? Academics have chosen to define a formal fine art canon which excludes it.

Yet the marketplace confirms that folk art is a force that cannot be ignored or dismissed  meriting the same level of attention as works by academically trained artists. Skinner sold an American folk art portrait for the world record price of $1.27 million in 2011. The rare 18th century portrait depicts fourteen-year-old Abigail Rose of North Branford, Connecticut. This work and others that have sold well in recent years introduce compositional elements and color in ways that seem distinctly modern, resonating with our collectors both for their beauty as objects of folk art and also for their more contemporary qualities.

Smith’s article mainly focuses on exhibition practices within museums, essentially asking the question “why don’t curators display folk art beside its mainstream contemporaries?” But I’m curious about the collectors’ side as well, and want to know your thoughts. How do you incorporate folk art into your collection?

Is folk art a separate-but-equal division within the wide range of collecting areas, or is it a part of the greater tradition that has been separated off unnecessarily? If you were to hang a folk art painting in your home, would you think of it any differently than an impressionist landscape or abstract expressionist work?

5 thoughts on “Is Folk Art Different from Any Other Art?”