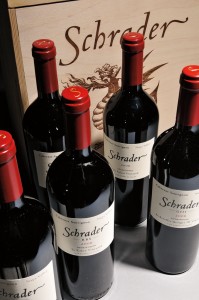 After co-founding Colgin-Schrader Cellars in 1992, Fred Schrader went on to fulfill his dream of producing world-class Cabernet bearing his name on the label, co-founding Schrader Cellars in 1998. Producing world class wine is one thing, but the heights of Schrader’s success is simply dizzying: recipient of James Laube’s first 100 point score for an American wine (2007 CCS and 2007 Old Sparky), back-to-back-to-back 100 point scores from Robert Parker (2006-2008 Old Sparky and 2006-2008 CCS) and wines lauded as the finest of the year from the profoundly great 2007 vintage. It’s no wonder that Schrader wines are among the most sought-after wines coming out of California.

While the concept is simple – produce outstanding examples of Cabernet Sauvignon showcasing the potential of specific clones from historic vineyard sites – the names may seem a bit confusing at first. I found myself wondering about the acronyms, and here’s what I’ve turned up:

Named for (Randy) Roach, (Thomas) Brown, (Fred) Schrader – the business partner, winemaker and owner, respectively, in the venture and made from 100% Clone 337 Cabernet from Beckstoffer To Kalon Vineyard. Clone 337 is a relatively new entry to the market which comes out of France, known for fruit-forward character and reliable yields.

Named for Carol “Colesworthy” Schrader – Fred’s wife, CCS is a blend of Clone 337 and Clone 4 Cabernet from Beckstoffer To Kalon Vineyard. Clone 4, also known as the Mendoza clone thanks to its Argentinean origins, is well-known for its spice, leather, tobacco and plum notes.

Named for Clone T6 (typically just called Clone 6), this wine is 100% Clone 6 Cabernet from Beckstoffer To Kalon Vineyard. Clone 6, also known as the Jackson Clone for the site where Clone 6 was isolated during Beaulieu Vineyards’ clone trials of the 1980s, is known berry, chocolate and plum notes and incredibly low yields.

An “ultimate-blend” of the best 8 barrels each vintage. The final cuvee varies year to year, but can be a blend of any of the Clones, all from Beckstoffer To Kalon Vineyard, and is bottled exclusively in magnum format.

A blend of the remaining Cabernet not used in the above specific bottlings, but all fruit originates from Beckstoffer To Kalon Vineyard.

Named for the vineyard, Geroges III; the first Schrader Cabernet vineyard outside Beckstoffer To Kalon. Another Beckstoffer vineyard, this AVA is Rutherford and the fruit was formerly used in Georges de Latour’s eponymous wine at Beaulieu Vineyards. In fact, the name, Georges III, refers to the fact that this was the third vineyard purchased by the Napa Valley legend. This wine is 100% Clone 337.

Named for the Las Piedras Vineyard, the newest addition to the Schrader Cabernet portfolio. Another Beckstoffer vineyard, Las Piedras is in St. Helena and has been home to vitis vinifera vines for over 150 years.

At our May 2, 2013 Fine Wine Auction, we are happy to offer seven horizontal lots of this elusive and exciting young winery.