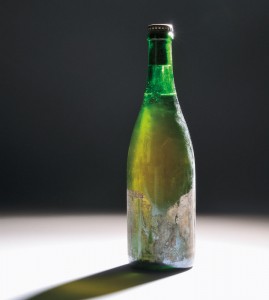 The concept of ageing beer is still relatively nascent, but rapidly gaining traction. While there are no hard and fast rules to what beers will benefit from cellaring, bear in mind that a two-year old IPA would be akin to a ten year old bottle of Beaujolais Nouveau – academic, but perhaps not enjoyable. Similar to wine, the vast majority of beer – even craft beer – is meant to be drunk very soon after production. However, many high-alcohol beers, barrel aged beers and beers that undergo a secondary, in-bottle fermentation are thought to be the ideal candidates for ageing. Styles that are widely believed to age well include:

This sour beer is made with malted barley, wheat and aged hops. Fermentation occurs naturally through exposure to ambient yeast and bacteria while fermented in oak barrels for one to five years. Unblended lambic is rarely bottled as the nature of the fermentation process can produce uneven results and the beer is generally still. Brussels and its surrounding areas are the spiritual heart of lambic production, though pockets of North America are developing as “new-world” alternatives.

Young and old lambics are blended to make this sour beer.  A classic style of gueuze is a blend of one, two and three year old lambics which undergo a secondary fermentation in bottle. Different strains of Brettanomyces, scourge of many wine producers, plays a critical role in lambic and gueuze production, providing profound acidity through the long fermentation.  Typically, bottles are sealed with a cork and will develop a Champagne-like carbonation over time.

Kriek (cherry) and Framboise (raspberry) are the most traditional of the fruit lambics, where fruit is added directly to the barrels of lambic where fermentation occurs, adding layers of complexity, sweetness and color to the finished product. Other fruits used include strawberries, blueberries, peaches and even rhubarb and vitis vinifera grapes.

Stout is a dark ale brewed with barley and roasted barley with common flavors of coffee, chocolate and even dark fruit. Imperial stout is a richer, higher alcohol version of stout (stout being a richer, higher alcohol version of porter) originally brewed by Britain for export to Baltic consumers – famously Russia’s Catherine the Great, hence, Russian Imperial Stout. Similar to India Pale Ale, the beers are subject to a heavier-than-usual hop schedule, providing a much-needed preservative for the journey. Recently, American breweries have taken to ageing their imperial stouts in various spirit casks and adding spices such as vanilla bean, cacao nibs and even chile peppers to enhance the complexity of the finished product.

The strongest recognized style of ale, barley wine uses a massive amount of malted barley to achieve beers of 10% alcohol and often higher. Like stout, barley wine originated as a British style, brewed for aristocrats in a vinous style, and has seen a recent resurgence in the US. Typically copper or amber in color, heavily hopped and cask conditioned, barely wines are a classic style for ageing, developing honey and nutty flavors through the years.

In November 2012, Skinner became the first brick and mortar auction house to offer beer alongside other lots of wine and spirits. Skinner is proud to once again offer a selection of Fine Ales fit for ageing in our May 2nd auction with examples of gueuze dating back as far as 1978 and a four-year vertical of Black Tuesday, a bourbon-barrel aged imperial stout.

2 thoughts on “Fine Ales at Auction: A Guide to Aged Beer”