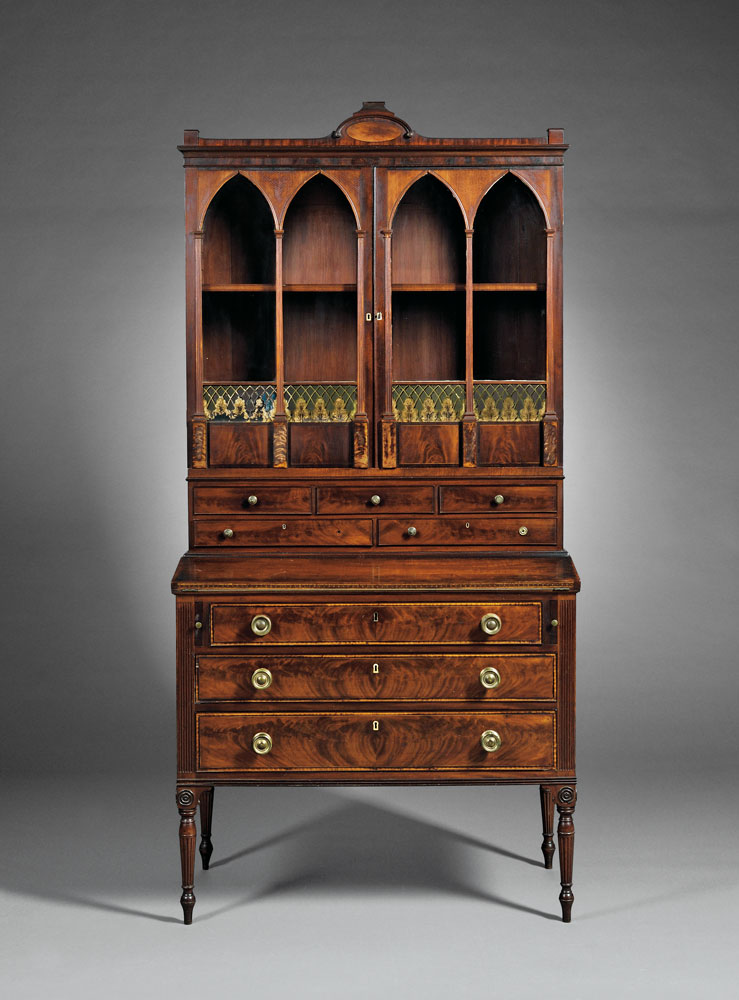 The lady’s secretary and bookcase was a cultural badge signifying a Boston lady of refinement and education during the Federal period. Mary Cleveland (Smith) Bryant (1784-1860) was such a lady. She had been well-educated as daughter of Rev. John Smith, a professor of Ancient and Middle Eastern Languages at Dartmouth College, and was widely read. It was probably purchased around the time of, or a few years after, her marriage in late 1807 to John Bryant III (1780-1865). He was the son of John Bryant II, the Deputy Commissary of Military Stores at the Federal Armory in Springfield. The elegant bookcase provided space for the increasingly affordable books then available to educated Bostonians. It was also designed to provide everything needed for letter writing to her increasingly dispersed family.

The year after the couple’s marriage on November 25, 1807, Bryant evidently furnished their Boston house, listing twenty-seven payments in his financial Waste Book under the category “House Furniture”. These included one for a “Bedstead” on July 5, 1808 to Boston’s premier cabinetmaker, Thomas Seymour.1 Under financial pressure in 1808, Bryant shipped out on an adventure in the brig Mandarin for Canton, his first to China.2 Bryant’s voyage and trading proved extremely profitable. After his return in 1809, he formed a partnership with William Sturgis dba Bryant and Sturgis, which eventually became one of Boston’s most successful China trade firms. The couple lived initially in a fashionable home in Tremont Place, later on Beacon Street near Charles Street.

After his return, Bryant made numerous additional purchases of house furnishings in 1810,  including another from Thomas Seymour for $39.00 for unspecified furniture which he recorded on Dec. 27.3 This payment may have been for the present secretary and bookcase. However, Bryant’s several voyages in this period are reflected in sporadic and incomplete entries for household expenses. Other purchases from Seymour and other craftsmen probably went unrecorded. Surviving Bryant family and business records do not include actual bills and receipts. 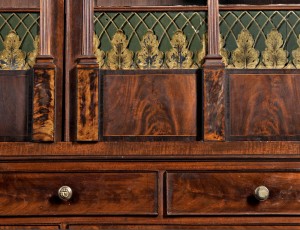 The secretary is one of at least four which employ églomisé (reverse glass) painting in two shades of green with repeating Gothic arches and centering stylized leafage.4 Details are picked out in fine black lines. This “fancy painted” work can be firmly attributed to John Ritto Penniman based on the very high quality of work, and on at least two of his characteristic techniques – faux-shadowing below and to the right of both leaves and arches which simulate light cast from the upper left; and detailed modeling formed by two or more layers of fine black lines applied at right angles to each other, also simulating depth and shadows. Penniman was a tenant in Thomas Seymour’s Boston Furniture Warehouse from at least 1808-1810. The two collaborated numerous times, most commonly for decoratively painted panels featuring flowers, leafage, or sea-shells on work boxes and quartetto, work and card tables.

Every aspect of the Bryant family secretary reflects Seymour’s habitual attention to detail and precise execution. Mahogany veneers are carefully selected of four different grain characters. Spandrels between gothic arches at the tops of the doors are beautifully faced with book-matched curly satinwood and outlined with his typical very fine-gauge black and white stringing lines. Large drawer fronts are framed with curly maple crossbanding, each accented by sand-scorching one long edge to provide greater depth and modeling. Keyholes on doors and drawers are lined or faced with bone shaped to three different patterns.  Precisely executed small-scale bead moldings are employed on lower case edges, the frieze, as an astragal molding on the glazed doors, on pilaster columns separating door panels and on the cornice. Molding miter joints are perfect. 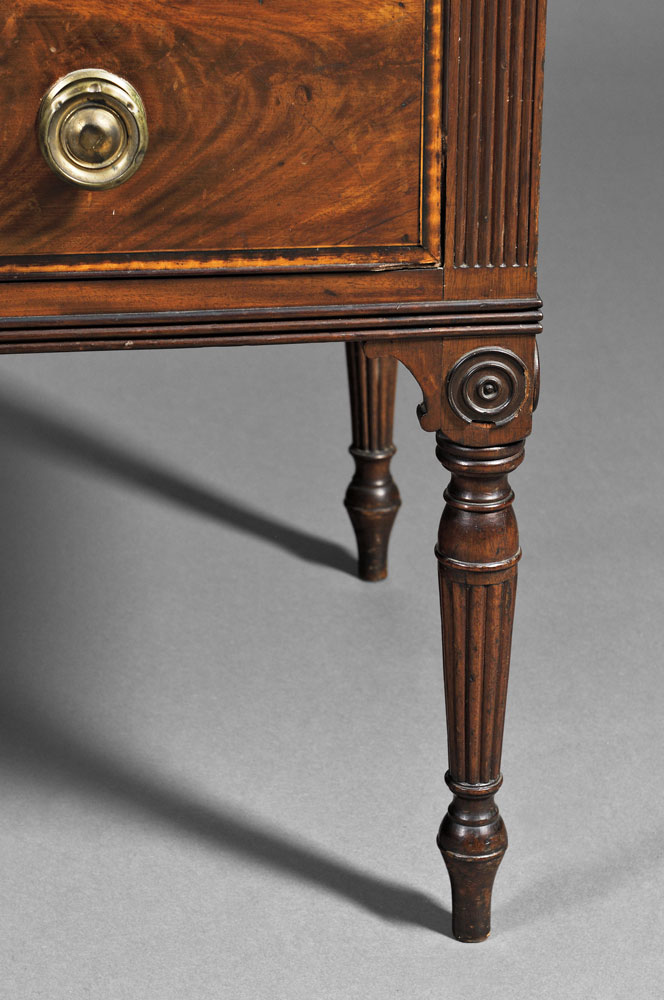 Small turned roundels applied on the leg blocks were employed frequently by Seymour in this period.

Drawer construction follows Seymour’s typical habits, with fine-gauge dovetails and bottoms beveled on the edges to fit into grooves in drawer sides and fronts. Glue blocking on drawer bottoms along front edges is of even size and evenly spaced. Glue blocks along the drawer sides are cut into short, regular segments from one continuous strip of pine, then butted, glued and cut off at an angle at the rear edge. Small interior and mid-case drawers require no glue blocking.

The design of the cornice is particularly refined, with its central oval inlaid with curly satinwood and black stringing surround set into a stripe-figured mahogany ground, its upper molded frame in the form of a semi-oval, and elegantly shaped and molded finial support block above. The small turned roundels applied at terminations of the half -oval molding and on the leg blocks were employed frequently by Seymour in this period. They reflect English Regency designs he began employing at about this period, and which increasingly dominated his work from about 1808 to 1817. Seymour’s use of lion-pattern hardware for the interior drawer pulls also follows Regency period preference.

An interesting and perhaps unique feature is the hinged lid which slants downward when opened to enable easier writing. This is supported at both ends by lopers which also slant down and slide in slanted housings in the case. Seymour’s penchant for constant experimentation resulted in enormous variation in his work. Except for sets and pairs, no two pieces it seems are alike. The Bryant secretary is no exception.

4. One with a central case with tambour doors is at The White House, acc. 974.1073.1, formerly owned by Israel Sack, Inc., pictured in Robert D. Mussey, Jr., The Furniture Masterworks of John and Thomas Seymour (Salem, MA: Peabody Essex Museum, 2003), cat. 20, pp. 174-75; another like this one with central exterior drawers is at Colonial Williamsburg, pictured in Barry A. Greenlaw, New England Furniture at Williamsburg (Williamsburg, VA: Colonial Williamsburg Foundation, 1974), pp. 124-25; a third is at the Museum of Art, Rhode Island School of Design; a fourth was owned by Israel Sack, Inc., pictured in American Antiques from Israel Sack Collection, Vol VI (Highland House Publishers, 1979), cat. P4640, pp. 1596-97.