From the monumental Tiffany centerpiece to the towering Polish tureen on stand and striking Russian Kovsh, the January 12 Fine Silver auction features some of the most imposing pieces I have worked with. While I have too many favorites to list, one such piece that caught my eye was the German sleigh-form centerpiece (Lot 206). Though my interest may stem from daydreams of this piece in the center of a holiday table setting, this impressive sleigh highlights some interesting aspects of the Hanau region of silver production as a whole. 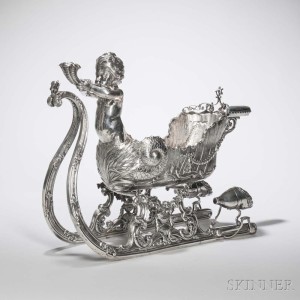 Hanau is located about 15 miles west of Frankfurt in south-central Germany and is probably best known for being the birthplace of the Grimm brothers. Interestingly, as the Grimm brother’s work began receiving recognition for reviving the traditional regional folktales, silver and goldsmiths in the region were beginning to revive historical styles of metalwork. These “historismus” silver wares were produced prolifically beginning in the mid-19th and quickly gained popularity throughout England, Europe, and America. They revived, not only earlier styles and forms but even earlier hallmarks as companies marked items with various pseudo-marks in the manner of pieces they were imitating. Whether they were meant as an emulation of the original or to deceive is still debated today, regardless they were valued even then in their own right and became showpieces in the international exhibitions of the day. Popularity and profit in these objects lead to an eventual over production and a decline in quality in the early 20th century. Later pieces were often an amalgamation of various styles including Gothic, Renaissance, and Rococo, rather than a true interpretation of an earlier design. 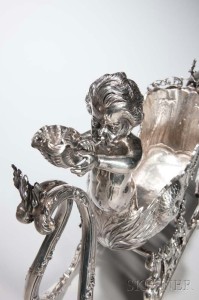 This sleigh centerpiece was made by one of the well-respected Hanau firms producing these wares, Neresheimer & Söhne. Founded in 1890, Neresheimer quickly rose to challenge the forefather of historismus silver in Hanau: Schleissner. The firm was celebrated for the quality and attention to detail in even their large scale pieces which included nefs, covered goblets, and sleigh centerpieces like the one featured in our January 12 auction.