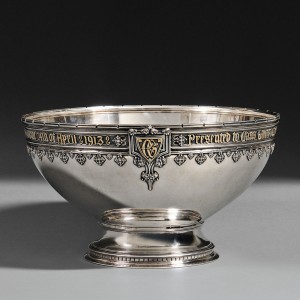 Few pieces of design excited the early modern American imagination like Cass Gilbert’s skyscraper for F.W. Woolworth. Built in Manhattan as the tallest building in the world (792 feet tall), it literally pushed to new heights the frontiers of modern engineering and design. Referring to Woolworth’s success as a five-and-dime magnate, the New York Times would later call the building “the skyscraper built by the nickels of millions.” The 20th century archetype for the American Dream started his first shop with a few borrowed and saved dollars; by the time he commissioned Gilbert to design his corporate headquarters, he was personally worth many millions. Fittingly, the Woolworth Building has often been called a Cathedral of Commerce, and its design represented a uniquely American combination: Old World Gothic finery adorning a New World engineering marvel. 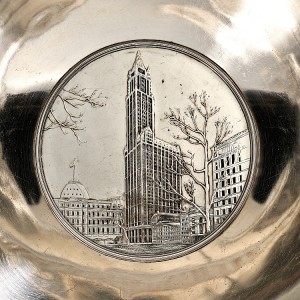 An engraved image of the Woolworth building appears inside the bowl

When its doors officially opened and the electric lights were turned on by President Wilson on April 25, 1913, the Woolworth Building hosted a legendary dinner, a grand affair which culminated in F.W. Woolworth’s presentation of this sterling silver punch bowl to his lauded architect, Cass Gilbert. If the Woolworth building was the brash celebration of the Woolworth fortune, the Cass Gilbert presentation bowl was its genteel précis. It distilled the soaring exuberance of the world’s tallest skyscraper into an elegant statement of superlative design. In its arrangement and execution, the artists of Tiffany & Co. summarized Cass Gilbert’s architectural opus by isolating elements of neo-Gothic ornament for the bowl’s rim, combining delicate detail with the clean, modern lines of the bowl’s silhouette and surface. Inside, an engraved image of the Woolworth building appears on the bottom of the bowl, transforming the scale of the monumental structure into the delicacy of a portrait miniature.

See the inscription on the bowl in this video: 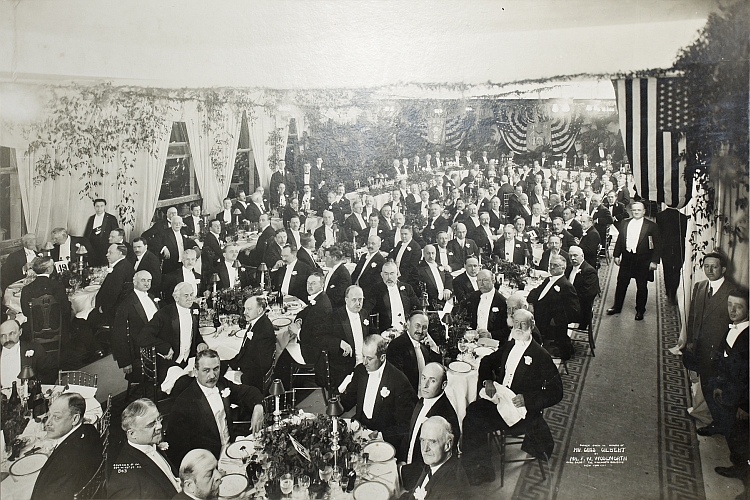