Skinner is delighted to offer a selection of works from the collection of Harvey Shipley Miller, who, with his then partner, J. Randall Plummer, began acquiring photographs in the 1970s just as the market for the medium was beginning to develop. Proceeds from the January 27 auction will benefit the Philadelphia Museum of Art. Among the highlights are a fascinating and eclectic group of the 19th-century offerings, including works by Antonio Beato, Auguste Salzmann, Francis Frith, Oscar Rejlander, Julia Margaret Cameron, and David Wilkie Wynfield, among others.

In the mid-19th-century, increased awareness of and accessibility to foreign lands created a burgeoning market for photographs as archaeological documents; evidence of the existence of religiously significant sites; tourist souvenirs and surrogates for travelers; and fodder for fantasies of foreign and exotic locales. The earliest photographers to the region were Westerners who worked under government sponsorship or as entrepreneurs exploiting the expanding commercial market. They overcame considerable technical difficulties caused by the intense heat, dust, and scarcity of clean water, and cumbersome, heavy equipment, to create enduring images of sites of historical and religious significance. 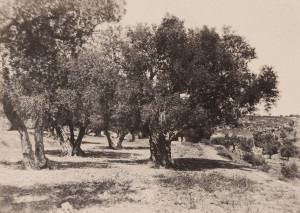 In 1854 amateur archaeologist and photographer Auguste Salzmann made approximately 150 calotypes (paper negatives) of historical monuments in Egypt and Jerusalem for France’s Ministry of Public Interest. His salted paper print of the Champ du Sang in Jerusalem (Lot 127, $1,500-2,500) depicts the site purchased by Judas Iscariot with the money he received for betraying Jesus. In 1856 Salzmann’s photographs were published in the two-volume series Jerusalem—Photographic Studies and Reproductions of the Holy City from the Judaean Period until Today.

Also on offer are two large-scale albumen prints of a Cairo street view and an Egyptian landscape by Francis Frith (Lot 132, $2,500-3,500; Lot 133, $3,000-5,000). Frith traveled to Nubia and Egypt in 1856-1857. He was the first photographer in the region to employ the wet collodion process for making negatives. Views of the region remained relatively unknown until Frith took advantage of the commercial market, selling albumen prints, stereoscopic images, and albums of text and images, including Sinai and Palestine (1859), in addition to mammoth-plate views such as the two on offer which were produced for an elite clientele. Additional views of Egypt are represented in a disassembled album of 28 prints by various photographers, including Antonio Beato (Lot 134, $1,000-2,000). 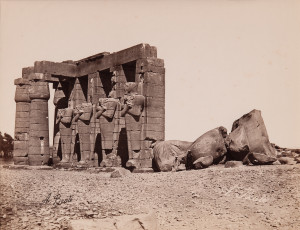 19th-century British photography is represented primarily by portraiture and figure studies. Oscar Rejlander studied painting in Rome and came to Britain in the 1840s. Although his initial interest in photography was as an aid to his own painting, by 1855 he had opened a professional studio in order to supply photographic studies to other artists (Lot 138, $800-1,200). Rejlander’s knowledge of painting and other media is evident in his photographs, which exhibit a partiality for sentimental genre scenes, character types, and allegory (Lot 137, $800-1,200).

Julia Margaret Cameron received her first camera as a gift in 1863 when she was forty-eight years old. Over the following decade, in a studio converted from a hen house on the grounds of her home in Freshwater on the Isle of Wight, she achieved unparalleled success as an artist. Cameron photographed some of the era’s greatest personalities, including Charles Darwin, 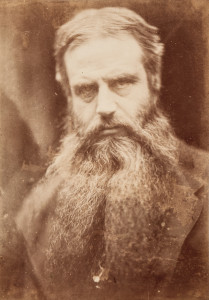 One of three Portraits of Victorian Artists, including William Holman Hunt, William Gale, and an Unidentified Man in Costume, c. 1860s (Lot 140, $600-800)

Other 19th-century photographers in the Shipley Miller collection include Adolphe Braun (attributed to), Désiré Charnay, Frank Jay Haynes (attributed to), Charles Marville, Eadweard Muybridge, Victor Albert Prout, James Robertson, and Robertson and Beato. There is strong material by 20th-century photographers as well! Come see all the fine photographs on offer during our auction preview hours, which are free and open to the public and held in our Boston gallery, on Wednesday, January 25 from 12-5PM, Thursday, January 26 from 12-8PM, and Friday, January 27 (day of auction) from 9-10AM.