A theme running through mid-winter celebrations across cultures is warmth and light, and the Jewish holiday of Hanukkah is no exception. Celebrated each year for eight nights and days beginning on the 25th day of Kislev, Hanukkah is the Festival of Lights.

Hanukkah commemorates the fight for religious freedom led by Judah Maccabee against the Seleucid Empire. After the Maccabean victory, when the Holy Temple in Jerusalem was rededicated,  it was found that there was scant little oil left to fuel the Eternal Lamp. To this day, we celebrate the miracle that enabled the lamp to burn for eight days (enough time to prepare a fresh supply of oil).

The variety of shapes and designs of Hanukkah lamps (also called Menorah’s or Hanukiyah) are endless, and come from every region the world where Jews inhabit. To add to this cultural diversity, materials vary from gold and silver to silverplate, brass, bronze, pewter, stone, ceramics or glass.

For collectors, this is its own “miracle,” as there is little risk of duplicates. Hanukkah lamps Skinner has offered at auction range from, the magnificent German 18th century Silver and Silver-gilt Synagogue Ark-form Hanukkah Lamp , which sold for $314,000, to a variety of collectible 19th and 20th century examples in our December 2016 online auction.

Some of my favorites in Skinner’s current Judaica online auction are: 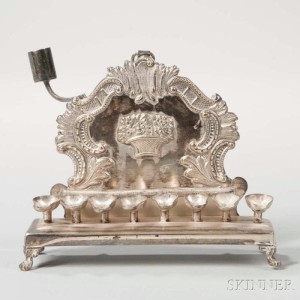 Small Polish Silverplated Hanukkah Lamp, Warsaw, late 19th century (Lot 1020) The form is elegant with mix of Rococo c-scrolls and rocaille and a Neoclassical basket of fruit, the oil pans are of minimalist design. 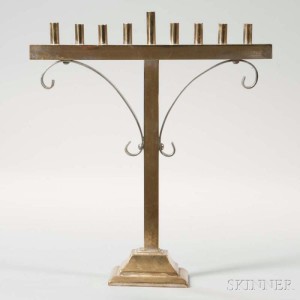 American Brass and Silverplated Hanukkah Lamp (Lot 1031) With its simple and refined form this Hanukkah lamp has a modern look and clean lines popular at the turn of the 20th century in America. 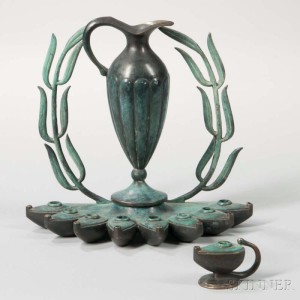 Pal-Bell Patinated Bronze Hanukkah Lamp, designed by Maurice Ascalon, Jerusalem, c. 1950 (Lot 1014). Recognizable with the references to Roman lamps and the patination of ancient bronzes the design is closely associated with early statehood. 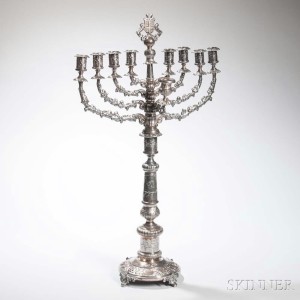 Polish Silver Convertible Hanukkah Lamp, Jan Pogorzelski, Warsaw, c. 1852-1876 (Lot 1025) Typical of the lamps popular in the late 19th century, the candle branches are separate, and assembled by inserting into the socket of the candlestick base. One top section could be used with Shabbat candlesticks for the Hanukkah observance, also allowing for easy storage