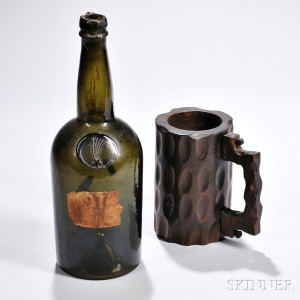 “This collection of nautical antiques represents the contributions of eight generations of my family’s history. My ancestors came to Jamestown, Virginia, in the 17th century, and later settled in Isle of Wight County. From the beginning they were involved in the nautical trades. Family members from elsewhere along the eastern seaboard soon joined them in Virginia, and established small shipyards in the greater Hampton Roads area.

Over the years, some of those ancestors became managers of larger shipbuilding enterprises that gave them the opportunity to collect rare examples of nautical antiques from both sides of the Atlantic. Their tastes were broad-based and eclectic within the nautical category, and their acquisitions reflect that. My 19th century ancestors collected British and American navigational instruments from the 19th century and earlier, as well as manuscripts, logbooks, sailor-made artifacts, shipboard tools, bladed weapons, guns, and cannon, land hailers and bosun calls, among many other examples in many other categories.

Into the 20th century, my family stayed active in the maritime and shipbuilding communities, and as a result the collection grew, to include artifacts and trophies of late 19th century and early 20th century yachting, including items related to legendary yachtsman Julian Roosevelt and his vessel Mistress, and items relating to America’s Cup competitors including the legendary yacht America.

The decision to sell did not come easily, but a change in lifestyle has allowed the opportunity and perspective to make that determination. I sincerely hope that, as you browse the auction listings, and tour the auction preview, you all will enjoy my family’s collection as much as I have.”