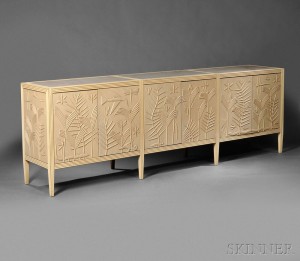 Artists of the Studio Movement create furniture, pottery, glass, metalwork, textiles, and jewelry for individual enjoyment rather than mass production. The movement traces its beginnings to the period just after World War II, and I, personally, have been watching the movement develop and mature for more than 30 years.

Over the years, I have had the pleasure to meet many studio artists in person. Knowing and connecting with the person who created a piece provides a fuller experience and understanding of the work. I respect these artists who devote their lives to making functional and non-functional objects of beauty, driven to master the materials they work with and follow their own paths to artistic fulfillment.

The Studio Movement is as exciting today as it was decades ago. The vibrancy of this art and design community is evident in the number of events going on around Boston this fall and winter. I hope you’ll find the time to attend the following exhibits and programs.

Tim Rowan: Fragments
October 12 – November 10, 2013
Lacoste Gallery, Concord, MA
This exhibition is ending this weekend, and Tim Rowan will give a talk on Saturday, November 9, 2013 at 2PM. “Life appears to have speeded up. I struggle to slow down,” Rowan says of his work.

Made in Massachusetts Furniture of the Bay State
October 12, 2013 – February 9, 2014
Fuller Craft Museum, Brockton, MA
The Fuller Craft Museum’s exhibit showcases furniture from the Studio Movement. The exhibit is part of the Four Centuries of Massachusetts Furniture, a collaborative project of eleven institutions that features exhibitions, lectures, demonstrations, and publications to celebrate the Bay State’s legacy of furniture-making. Skinner is proud to be a presenting sponsor.

The 2013 deCordova Biennial
October 9, 2013 – April 13, 2014
deCordova Sculpture Park and Museum, Lincoln, MA
I love visiting the deCordova sculpture park at any time of year. The biennial is a special survey exhibition focused on art-making in New England today.

Other Places to Visit

The Museum of Fine Arts, Boston
In 1989, The Museum of Fine Arts, Boston launched their first exhibit showcasing the work of the Studio Movement: The Maker’s Hand: American Studio Furniture, 1940-1990. This historic exhibit helped put the movement on the map, and the MFA continues to maintain a collection with fine examples of works by studio artists.
The MFA is a participant in Four Centuries of Massachusetts Furniture.

If you know of an event that I have not mentioned, or if you’re not in the Boston area and want to share information about an event in your area, please leave a comment below. I hope you get a chance to explore and embrace the art of the Studio Movement during the fall and winter season.