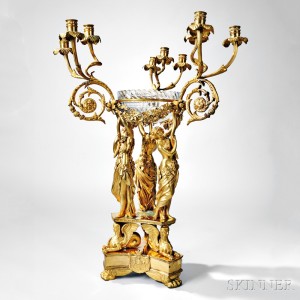 At the turn of the 19th century, the art of table decoration transformed as dining patterns changed. The once popular dining à la française in which all of the courses were laid out for the guests at the start of the meal began fading out of popularity as a new fashion of eating was ushered in: dining à la russe. Similar to modern restaurant service, food was prepared in the kitchen and brought out to the guests in courses, leaving room on the table for decoration. These elaborate table ornaments, or surtout de table, become a focal point throughout the meal, usually featuring several candelabra, étagères and centerpieces adorned with fruit and flowers and displayed on an elaborated mirrored plateau.  Skinner has the privilege of offering one such service on July 18th in the European Furniture & Decorative Arts auction.

Purchased in 1975 at Harrods, this assembled table service incorporated several distinct components: a pair of six-light candelabra (Lot 362), pair of étagères (Lot 361), and a pair of brule-parfums (Lot 360). The two most impressive pieces in the service however are the seven-piece plateau attributed to Pierre-Philppe Thomire (Lot 364) and the centerpiece by Rundell, Bridge & Rundell (Lot 359).

At over 30 inches high, the dominating Rundell, Bridge & Rundell centerpiece features Bacchic maidens, sphinx supports, and rinceaux-cast candle branches. The amalgamation the Neo-classical and Egyptian-revival motifs speak to the great diversity of inspiration and talent within the Rundell firm at this time. Rundell, Bridge & Rundell was formed by Philip Rundell and John Bridge in London at the end of the eighteenth century and went on to become the greatest firm of goldsmiths, jewelers, and medallists at the time. With artists and designers, like John Flaxman, Paul Storr, Benjamin Smith, Augustus Pugin, and Jean-Jacques Boileau among numerous others, the firm was an innovator of style and taste. As the “Eygptomania” swept across Europe into England after Napoleon’s campaign in 1798, it was quickly adopted and popularized by designers like Thomas Hope and Pecier & Fountaine. The winged sphinx featured on this piece was used in a number of Rundell, Bridge & Rundell’s commissions and became a prevalent symbol of Egyptian exoticism. 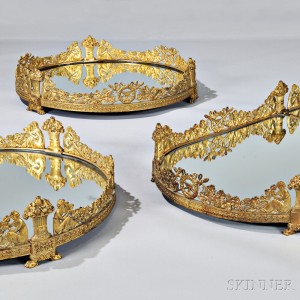 The other stand-out piece from this grouping is the seven-piece mirrored surtout de table, on which the other elements of the central table service would have been displayed. Comprised of a five-piece central segment and two circular plateaus, this piece would have been a dominating feature on the Empire dining table. While unsigned, it is attributed to Pierre-Philippe Thomire (1751-1843).Thomire was the most-celebrated bronzier-ciseleur of the time establishing his own workshop in 1776, gaining the patronage of the French elite including Napoleon before becoming ciseleur de l’Empereur in 1809. The theme of celebration and prosperity is prevalent in the classical motifs featured on this piece as Bacchic maidens sit between pendant grapevines, thyrsi, and fruit-filled urns.

In addition this table service an impressive selection of European Furniture & Decorative Arts will be up for auction at Skinner’s Boston Gallery on July 18th and 19th.