David Andersen opened his eponymous shop in Christiania (now Oslo) Norway in 1876. As a designer and retailer specializing in jewelry and silver wares, Andersen’s business model closely mirrors that of Danish silversmith Georg Jensen, who was twenty-three years his junior. Jensen opened his shop in 1904. Upon Andersen’s death in 1901, his sons took over company operations and designs. Today, David-Andersen (the company’s name since the early 20th century) is practically synonymous with mid-century enameled silver jewelry. 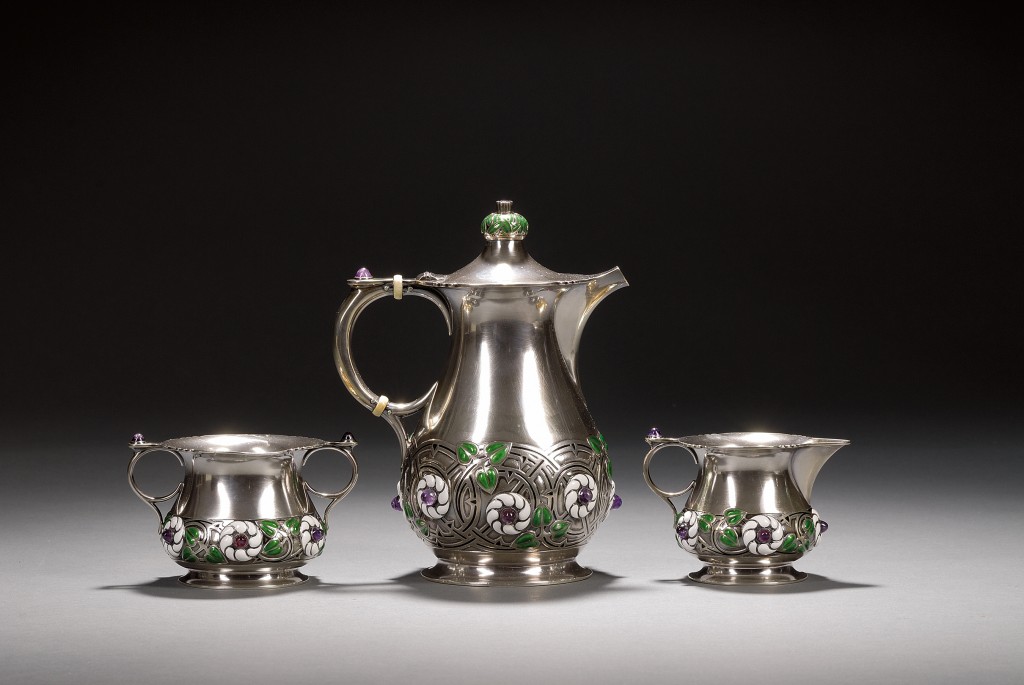 While embracing contemporary design aesthetics, David-Andersen silver drew on a long tradition of enamel work, both at the company and in Scandinavia. Today’s collectors covet pieces in the Art Nouveau and Dragestil styles that date from the first fifty years of the company’s production. The incorporation of virtuosic techniques, such as plique-a-jour enameling, or expensive materials, like semi-precious hardstones, only add to a piece’s appeal. The silver ewer and coffee service depicted here both typify early work in the Art Nouveau style. Polychrome enamel and semi-precious stones are effortlessly incorporated into the naturalistic designs.

The October 5, 2013 European Furniture & Decorative Arts auction features Fine Silver, including these two Andersen salts that are typical of the company’s early production. One features a raised amethyst-colored basse-taille enameled bowl framed by pierced green plique-a-jour enameled leaves. The other is decorated with traditional floral cloisonné enameling and rests on lion-form feet. Although these silver salts are modest pieces compared with the hollowware mentioned above, they remain strong examples of the high quality design and execution found in the early work of the David-Andersen company.