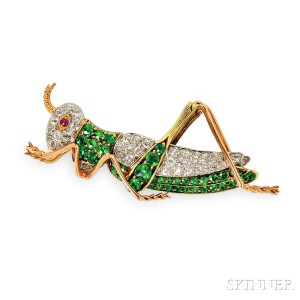 Some of the most beautiful gems in the world came from the Ural Mountains of Russia in the 1800s. Emeralds, sapphires, topaz, alexandrite, malachite, and amethysts of unmatched quality were mined under the Czar’s direction. Many made their way to the palaces and imperial jeweler Carl Fabergé, others were sent to the best jewelers in Europe and the United States. In 1868, the Russian miners discovered the most distinctive, and in my opinion the most beautiful, stones in the Urals:  demantoid garnets. They quickly became a sought after gemstone worldwide and are found in some of the finest antique jewelry designs.

The demantoid belongs to a large family of garnets, which comprise many colors from colorless to red, orange, pink and brown.  A demantoid garnet is a vivid green color, ideally the color of an emerald. In addition to it’s color, what sets a demantoid garnet apart from other gems is it’s brilliance and dispersion. Demantoid means “diamond like” and it is true to it’s name with adamantine luster and fire. Large stones are rare; most are under one carat. 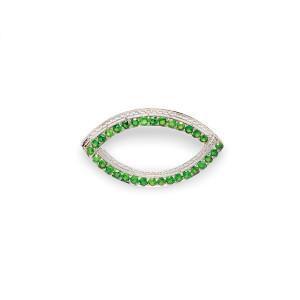 From their discovery in 1868 until World War I, demantoid garnets were used by the world’s most famous jewelers. Tiffany & Co. sent their gem expert, George F. Kunz, to Russia to buy vast amounts of demantoid rough. They made extensive use of demantoid garnets in their jewelry, more so than any other jeweler of the period. The Russian mines were largely depleted by the mid-twentieth century and demantoid garnets are now mostly found in antique jewelry. Several other sources of demantoid garnets have since been discovered in Italy, Iran, and Namibia, but they do not compare to the quality of the Russian gems.