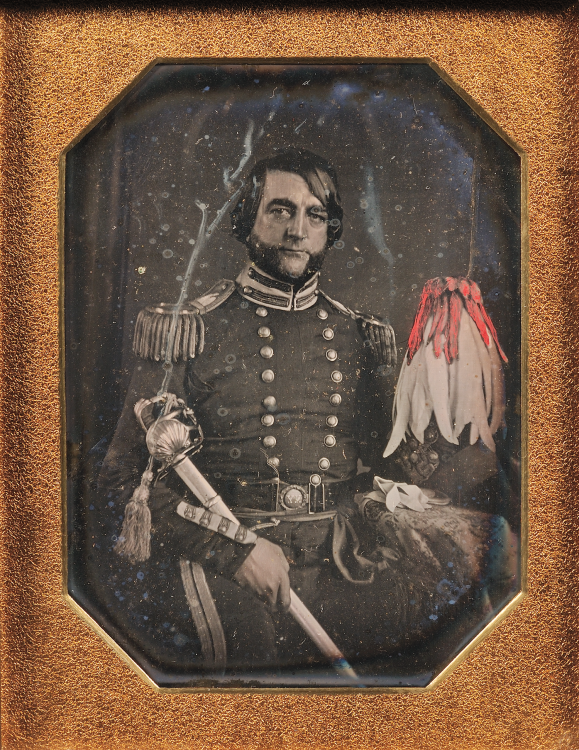 On October 30, 2011, Skinner will offer the first part of the Early Photography collection of Rod MacKenzie in our American Furniture & Decorative Arts auction. Read Part I of this series to learn more about Rod MacKenzie’s sophisticated taste as a collector.

MacKenzie’s extensive knowledge of American history, particularly of the Civil War, is represented by dozens of extraordinary images of military officers and soldiers. The collection includes portraits of soldiers of all types:  officers, dashing men in uniform, and heart-breaking images of very young men headed off to war. In looking at these images, we feel tantalizingly close to the battlefield and to the figures taking part in military history. Notes tucked behind case liners, such as “taken at Newbern, No. Carolina 1863 WLW Private C. E. 44th Mass,” bring us in even closer.

Another focus of the collection is photography of children being children in ways we aren’t used to seeing in 19th century photographs. One highlight is an image of a class of thirty children attending “Petersham School in Miss Laura’s Day.” We must credit the photographer for keeping the kids still during the exposure, though perhaps more of the credit is due to Miss Laura herself.

Rod found a pair of photographs showing a sweet-faced boy and a girl, probably twins, seated in the same stencil-decorated chair. He has an image of a girl holding a chalkware cat, and another of a boy with his paint-decorated drum – both subjects hold their cherished possessions close. 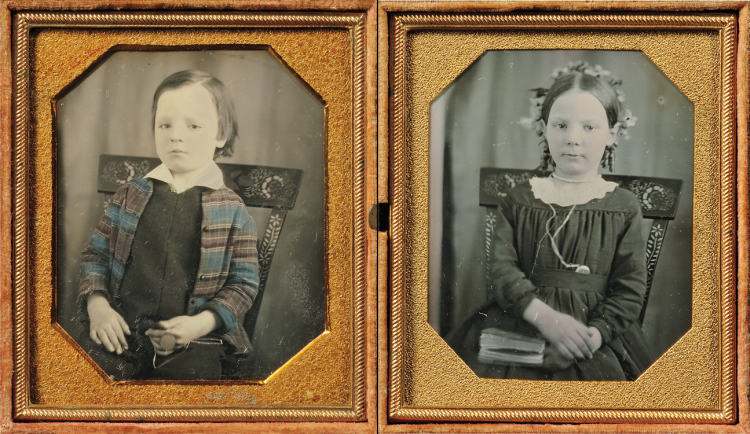 Rod made an effort to collect images of leisure activity, too, giving us even more opportunity to peer through a window into the 19th century. There’s an image of two men playing checkers housed in a Union case appropriately called “The Chess Players.” An ambrotype of four men, one wearing a military cap, holding mugs of beer, allows us to view a moment of revelry. A half-plate daguerreotype of hunters posing with game and their hunting dog represents the type of artistic composition that daguerrians often practiced. In another, a gentleman hunter with a stovepipe hat and a frock coat poses with his long gun against a painted backdrop representing a rural landscape, all housed in a case called “The Hunter.” 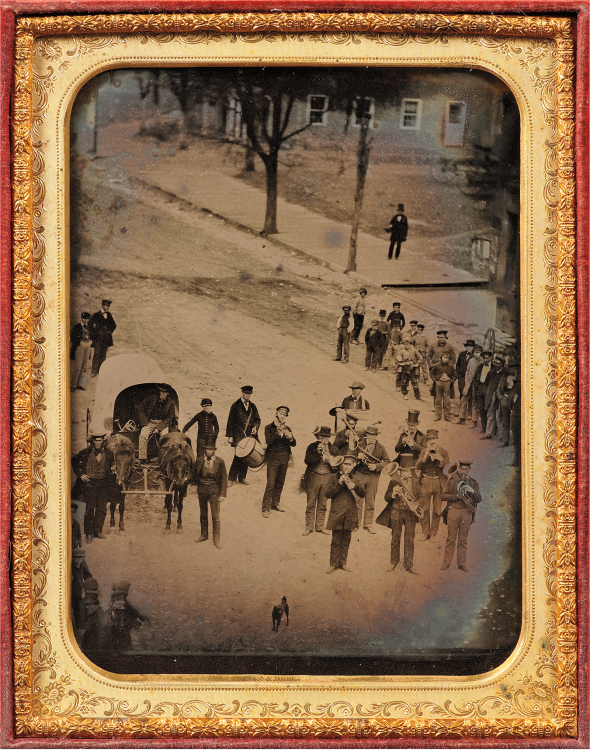 City- and townscapes, another category in the collection, are represented by some rare early photographs of mid-19th century houses including a gothic cottage, a Greek revival farmhouse, and a three-story Federal mansion. Perhaps rarest of that group is an image showing a street parade in Whitehall, New York.

Many of these sometimes haunting photographs are housed in rare thermoplastic or “Union” cases, each collectible in their own right for their unique designs. To create these cases, a specific mix of shellac, pulverized wood fibers and dyes would be heated to create a thick plastic liquid. That semi-solid was rolled out into a sheet, then individually pressed into any one of dozens of patterns which hardened when cooled. Half-plate examples of these thermoplastic cases in the collection are titled “Washington Monument, Richmond, Virginia,” “American Country Life – Summer Evening,” and “The Wedding Procession.” Others show firefighters, military trophies, and more.

In all of Skinner’s years in the business, we’ve crossed paths with and offered hundreds of early photographs. Rarely have those images equaled the quality and beauty of the pictures Rod found, or given us such insight into the people they show.