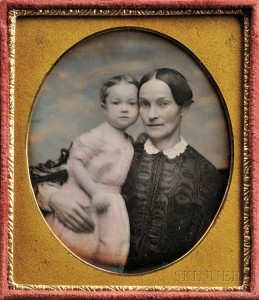 A daguerreotype is a highly detailed photographic image on a sheet of copper that has been plated with a thin coat of silver and then exposed to light. It is a one-of-a-kind direct positive, meaning that there is no negative from which to make multiple reproductions. Developed by Jacques-Louis-Mandé Daguerre, a French artist and scenic designer, the daguerreotype process was the first practical and widely available method of obtaining permanent images with a camera. The announcement of Daguerre’s invention was made at the French Academy of Sciences in Paris in January 1839, and by the spring of that year, news of the process had traveled to America where its novelty and commercial potential attracted many entrepreneurs.

The majority of daguerreotypists were portraitists, as evidenced by over seventy-five works in a New England collection on offer in Skinner’s Fine Prints and Photography auction on May 16, 2014. The daguerreotype portraits depict men, women, and children, both individually and in groups, as a tender image of a mother and her child posing cheek to cheek demonstrates (Lot 88, Estimate $300-500). The works in the collection are primarily by American studios, but there are two strong portraits by the British daguerreotypist William Edward Kilburn (Lots 87 and 150, Estimate $1,000-1,500 each). 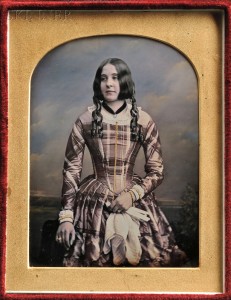 The style and presentation of daguerreotype portraits is rooted in the practice of miniature portrait painting, which was popular in Europe from the second part of the 18th century through the first half of the 19th century. Posing conventions and scale are similar, as is the practice of presenting the finished objects in cases. However, because photography dramatically increased the standard of representational truth, most miniature painters were soon forced out of business. In addition, daguerreotypes were accessible to a wider array of consumers than the miniature. While a whole plate (6 ½ by 8 ½ inches) daguerreotype was too expensive for all but a fraction of the population, the smaller sizes available—from a quarter-plate (3 ¼ by 4 ¼ inches) to a sixteenth-plate (one quarter of that size)—made sitting for a daguerreotype portrait more affordable. The most common size was the sixth-plate (2 ¾ x 3 ¼ inches), and there are numerous examples in the auction including a portrait of a young man wearing a top hat (Lot 115, Estimate $200-300).

The photographic firm of Albert Sands Southworth and Josiah Johnson Hawes was the preeminent daguerreotype studio in Boston from 1843 to 1863. They were well-known for their artistic and expressive portraits of members of Boston’s elite and intellectual community, which were made using natural daylight conveyed through a large overhead skylight. While several works in the collection are School of Southworth & Hawes, one daguerreotype (Lot 114, Estimate $300-500) can be attributed to the photographers based on its qualities and also its brown leather case, which is typical of those used by the studio.

Because daguerreotypes could not capture color, artists often applied tinting by hand. Several of the works in this collection display high-quality hand tinting (Lot 132, Estimate $1,000-1,500) and unusual colors such as the yellow used to accentuate a young girl’s dress (Lot 130, Estimate $500-700). A daguerreotype identified by a stamp in the brass mat as being made by the studio of Jeremiah Gurney (Lot 141, Estimate $500-700) is another rare find because of an inscription at the plate’s bottom that appears to identify the operator who made the portrait. While not fully legible, the inscribed name may be that of James Forbes who worked for Gurney at his New York studio around 1855.

Daguerreotypes were part of a growing consumer culture and represented a new way of expressing identity at a time of considerable change. While originally serving a utilitarian function, these constructed images balance both descriptive qualities and aesthetic appeal. As objects, daguerreotypes reflect the skilled craftsmanship and creative vision of studio photographers while also providing a fascinating window onto aspects of 19th-century social and cultural history. 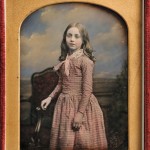 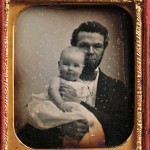 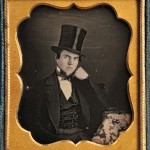 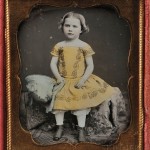 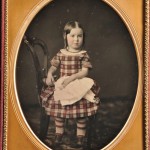 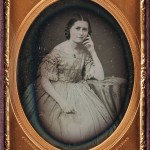