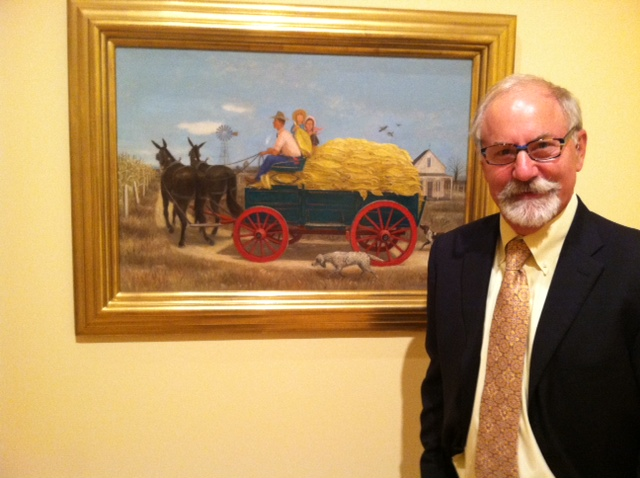 Stephen Fletcher, Vice President and Director of American Furniture & Decorative Arts at Skinner, stands with the painting "Off to Auction" by Doris Lee, at Crystal Bridges museum

When you hear the names Rockefeller, Edward A. Whitney, and Henry Clay Frick, you immediately think about the great cultural and art institutions they gave to our country: Rockefeller University, the Whitney Museum, and the Frick. Now, a new name has been added to the list of institutions made possible through philanthropy: Crystal Bridges.

This strikes me very much as an American tradition: families or individuals who have amassed great wealth reach a point at which they want to give back to the country that afforded them extraordinary opportunities. Alice Walton and Walmart follow in this tradition by establishing the Crystal Bridges museum. The museum is devoted to American art and artists, and admission is free thanks to Walmart’s sponsorship.

I had the opportunity last week to attend the inaugural week opening ceremonies at the museum in Bentonville, Arkansas. In the galleries, fabulous 19th century romantic western landscapes stand in marked contrast to early 20th century modern masters. The range of art is incredible, and there’s a wonderful diversity of style and subject matter. They’ve taken great care to gather quality art by the best American artists, from the 18th through the 21st century. Just a few of the artists represented are John Singleton Copley, Albert Bierstadt, John Singer Sergeant, Norman Rockwell, Childe Hassam and Jackson Pollock.

I was fortunate enough to meet Alice Walton, who was exceedingly gracious and pleasant. She remembered Skinner and the painting we sold which now hangs in one of the galleries: a 19th century portrait of a girl and her dog in a grape arbor. It’s a wonderful painting, and I enjoyed visiting with it again.

I also met Moshe Safdie, the architect who designed the museum. I love the building. It’s a piece of bold and innovative modern architecture that integrates harmoniously into the rolling hills of the surrounding countryside.  The superb gallery spaces are connected by pod-shaped arched rooms constructed of glass and wood – the so-called “crystal bridges” after which the museum is named. I asked Moshe, “What is it like to be sitting inside this beautiful room?” He gave two thumbs up and smiled.

On reflection, the total effect of this new museum is sublime. It was a privilege to be invited to participate in the opening, and I’m sure that Crystal Bridges museum will become a popular and important destination for American art lovers, tourists, and travelers.