Skinner is privileged to offer a monumental twelve-panel Coromandel kuancai lacquer screen (Lot 523) on March 19 at the Asian Works of Art auction in Boston. More than 8 feet high and 21 feet wide, the screen is majestic in appearance and awe-inspiring for it’s complexity in composition as well as it’s precision in depicting mythological scenes with numerous immortal deities and all varieties of flora and fauna. Such themes in meticulous details on giant lacquer screens were in fashion and widely popular during the Kangxi period (1661-1772) in China.

The term ‘Coromandel’ is coined after a region in the southeastern part of the Indian coast spotted with many trading posts developed by European merchants and traders during the 16th and 17th centuries. Chinese lacquer wares were among the major export items there to be distributed to European markets. Coromandel lacquer screens such as this one were well received particularly in Paris, as it was the epicenter of the Chinoiserie trend. Coco Chanel was one of the avid collectors of Coromandel screens and is rumored to have owned more than 30, housing several in her Paris apartment.

Coromandel lacquer screens were made using a technique called kuancai, literally meaning incised and colored. The technique was developed during the 16th to 17th centuries and involves several steps: Large panels of wood are primed with multiple layers of ash, powdered brick, pig’s blood, and lacquer compound. The prepared panels are then covered with a fabric, over which innumerable layers of black or red lacquer are applied to obtain a thick veneer to be burnished. Lastly, designs are incised on the smoothened surface and filled with polychrome lacquers, oils, and pigments. It is believed that the technique was devised as a relatively cheaper method to create giant screens mainly to supply the domestic demand of rich merchants and officials, who wanted them in their homes but could not afford the imperial sorts inlaid with expensive mother-of-pearl and tortoiseshell that only imperial old hands could handle. Still expensive to produce, the kuancai screens were often inherited for generations, safeguarded in storage and occasionally pulled out to create a more closed space within a room or at a garden as a backdrop to enhance the mood of special occasions such as weddings, birthdays, and even ancestral rites. 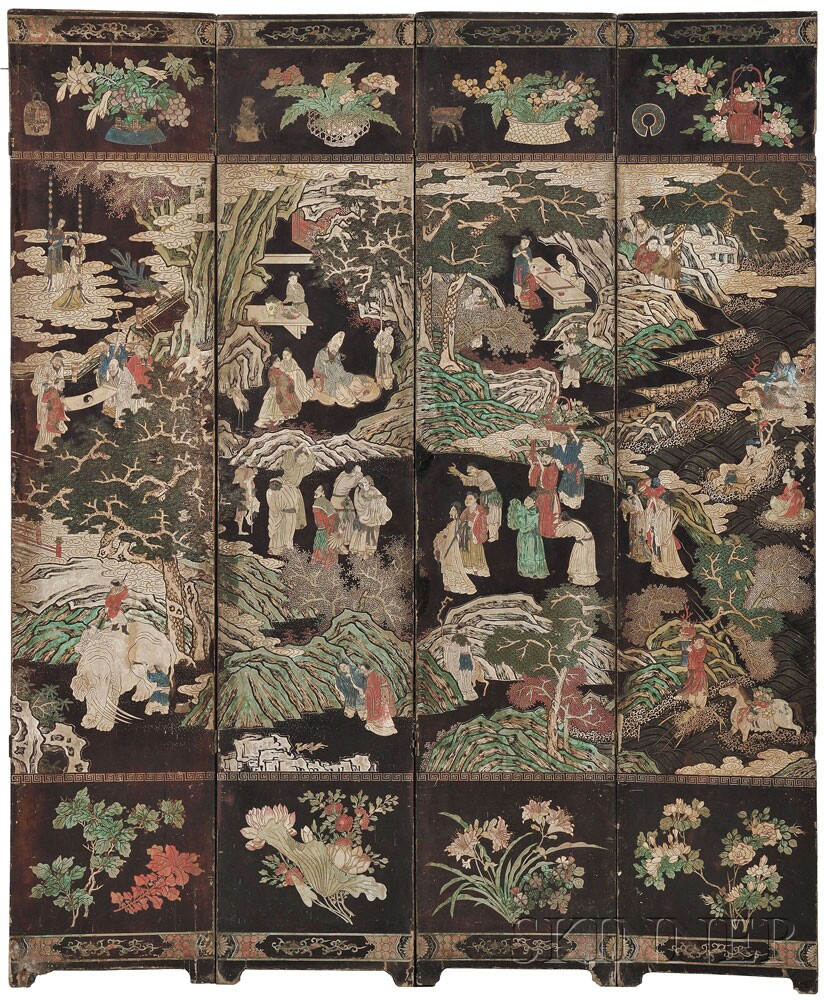 Our screen is carved on both sides with the front illustrating a panoramic scene of the Peach Festival populated with legendary immortals and mythical animals. Xi Wangmu, the Queen Mother of the West and the Goddess of prosperity, longevity, and eternal bliss, is emerging on heavenly clouds in the upper left along with a group of her attendants including two carrying a giant peach probably picked from her secret garden, where she grows special peaches that only bear fruit once every 3,000 years. Shoulao, prominent by his protruded forehead, is occupying the center while the Jade Emperor is descending from the upper right along with other deities arriving from the sea riding on all sorts of mythological animals. The festive scene is enclosed with twelve mixed floral bouquets and sixteen floral arrangements in baskets and vases as well as scholar’s objects between two patterned bands.

An exuberant garden scene with various birds and flowers is depicted on the reverse side of the screen. A pair of phoenixes, as the king of all birds, is dominantly occupying the center perched beneath the Chinese parasol tree. The majestic birds are surrounded with other pairs of birds including cranes, pheasants, mandarin ducks, peacocks, and numerous small songbirds. Believed to appear only in peaceful and prosperous time, the phoenix was often considered a harbinger of a great ruler and used as the emblem for the empress as the dragon for the emperor. All birds are also depicted in pairs, strongly suggesting that this screen could have been commissioned as a wedding gift to wish newlyweds connubial bliss and used in the couple’s bedroom. The “Hundred Birds” scene is surrounded with all sorts of propitious creatures in Chinese mythology such as dragon, qilin (a unicorn who appears with the arrival of a great king), pixiu (who expels evil spirit), baize (a white haired beast who can speak language), kui (ox beast), xiezhi (lion with horns), hou (lion with two long ears), white elephant, white tiger, etc. except the top, which is decorated with twelve assorted vessels of “Hundred Antiques” and scholar’s accouterments including one with a peacock feather and coral branch symbolizing a wish for the highest rank. 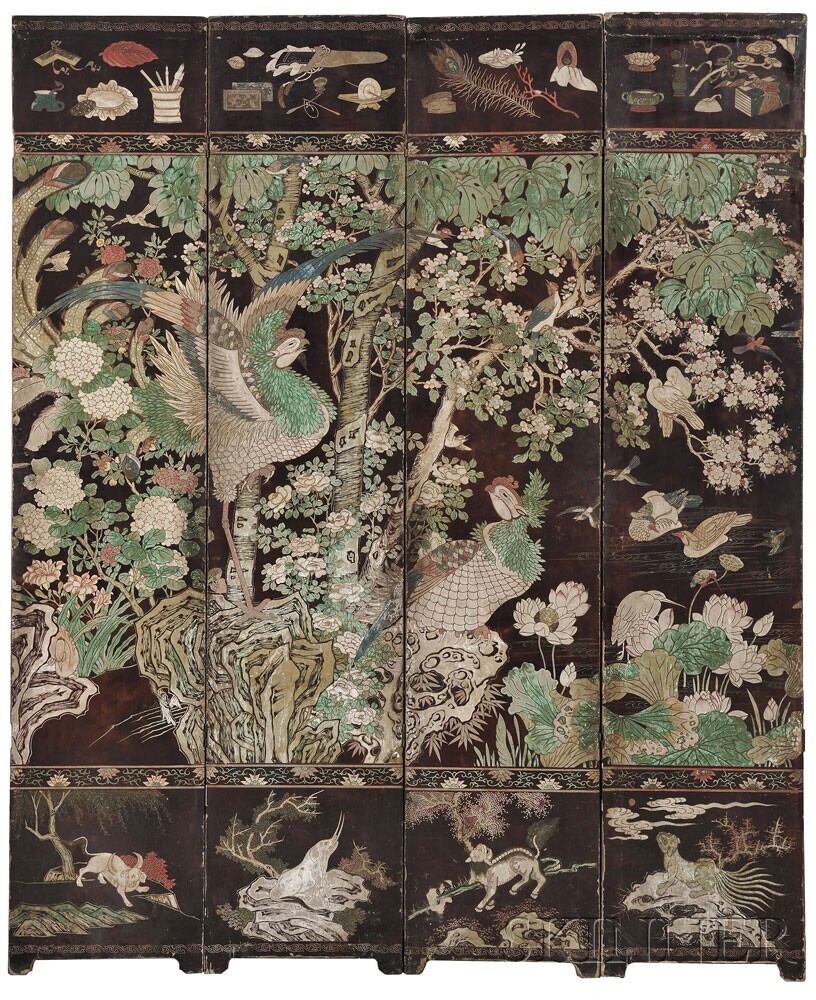 This twelve-panel Coromandel kuancai lacquer screen was purchased from C. T. Loo in 1931 from his New York studio by Andre Carlhian (1883-1968). It was shipped to Paris and kept in Andre’s apartment on the Quai D’Orsay and given to his son Jean Paul Carlhian (1919-2012), father of the current owners. Andre Carlhian and his brother Paul developed their father’s import-export business into a major interior-decorating firm with offices in Paris, London, New York, and Buenos Aires. Specializing in antiques, panoramic wall papers, and antique casework and paneling, the firm designed interiors for a huge roster of international clients, including the Philadelphia Museum of Fine Arts and the Bosch Palace, the United States ambassadorial residence in Buenos Aires. The Carlhian Records (1867-1980) are archived at the Getty Research Institute. Jean Paul immigrated to the United States in 1947. After receiving a degree from the Ecole des Beaux-Arts and teaching at the Harvard Graduate School of Design, he left Harvard in 1955 and joined the firm of Shepley, Bulfinch, Richardson, and Abbott, where he designed many institutional buildings, including the Arthur M. Sackler Gallery, the National Museum of African Art, the S. Dillon Ripley Center, and the Enid Haupt Garden at the Smithsonian Institution in Washington, DC.