My relationship with the Photographic Resource Center (PRC) dates back to my days as a graduate student at Boston University. I had the good fortune to be awarded a research fellowship to administer the 2001 Leopold Godowsky, Jr. Color Photography Awards, which honor the co-inventor of Kodachrome film. The international awards recognize excellence in the field of contemporary color photography, and that year the focus was on Africa. Four photographers were recognized, including Yinka Shonibare (Nigeria) and Philip Kwame Apagya (Ghana) — both artists’ work is now well-known across the globe. Since that time, I have seen fascinating exhibitions, attended wonderful lectures, and reviewed many a portfolio at the PRC. 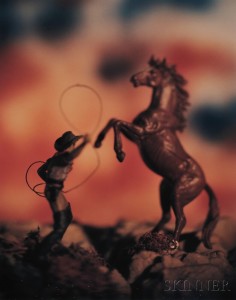 Since 1976, the PRC at Boston University has served, as their mission states, as “a vital forum for the exploration, interpretation, and celebration of new work, ideas, and methods in photography.” In a nutshell, for almost forty years, the PRC has offered a broad range of provocative monographic and themed exhibitions featuring local, national, and international artists; educational programs such as lectures by major contemporary photographers, workshops and classes, and book signings; support for photographers including portfolio reviews, juried exhibitions, and opportunities to share images and conversation; and insightful writing from the early newsletter Views to its most recent iteration Loupe in addition to the PRC blog and Northeast Exposure Online (NEO), a web-based showcase of regional photography.

Skinner is pleased to offer a selection of photographs in our September 19th Fine Prints and Photographs auction to benefit the PRC, a small non-profit with a big agenda dedicated to supporting the advancement of the photographic arts. Among the offerings are works from the PRC Print Program, which dates back to 1988 and contains limited edition prints made for the PRC by internationally recognized photographers, including Barbara Bosworth, Paul D’Amato, Frank Gohlke, Henry Horenstein, György Kepes, David Levinthal, Arno Minkkinen, John O’Reilly, Olivia Parker, Michael Stipe, and Ernest Withers. 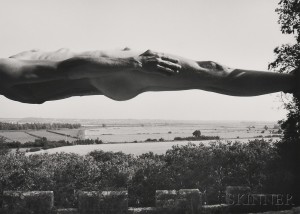 One of my favorites in this group is an untitled work from Levinthal’s Wild West series (Lot 203). A key figure in the history of postmodern photography in America, Levinthal creates tableaux using such popular culture references as vintage children’s toys and black memorabilia. In this image, he plays with depth-of-field and vibrant color to bring to life miniature figures of a cowboy dramatically lassoing a rearing stallion. Another intriguing photograph is Arno Minkkinen’s Abbaye de Montmajour (Lot 206), a classic example of his unmanipulated nude self-portraits. Minkkinen’s body appears to float in midair, echoing the horizontal lines created by the distant fields.

In 1982, the PRC produced a portfolio called New Works by 10 Massachusetts Photographers consisting of one photograph each from ten Boston-area photographers, including Eugene Richards, who is represented in the September 19th sale by two prints. Twenty-six years later, in 2008, a new group of eighteen works was published as the PRC Portfolio, and a selection of ten prints from the project will be on offer. 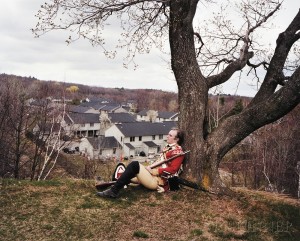 As with the PRC Print Program, all the photographers represented are internationally recognized, but also have local connections to the PRC. Most, including Susan Meiselas and Arno Minkkinen, have exhibited or lectured there. Abelardo Morell, Barbara Bosworth, Frank Gohlke, David Hilliard, Henry Horenstein, and Sage Sohier are or have been influential professors of photography in the area in addition to being recognized around the world for their own work. While all the images in this portfolio are exceptional, I have always been drawn to the figure in Sage Sohier’s British Redcoat Re-enactor, Battle of Concord and Lexington, Lexington, MA (Lot 216), who, like Rip Van Winkle, appears to have fallen asleep against a tree, and will soon awaken in a foreign and future time portended by the modern gray housing complex behind him.

In addition to seeing this wonderful selection of photographs during our auction preview hours Wednesday, September 17th  from 12-5 pm, Thursday, September 18th  from 12-8 pm, and Friday, September 19th  from 9-10 am, we hope that you will consider bidding to support the future activities of Boston’s own Photographic Resource Center.