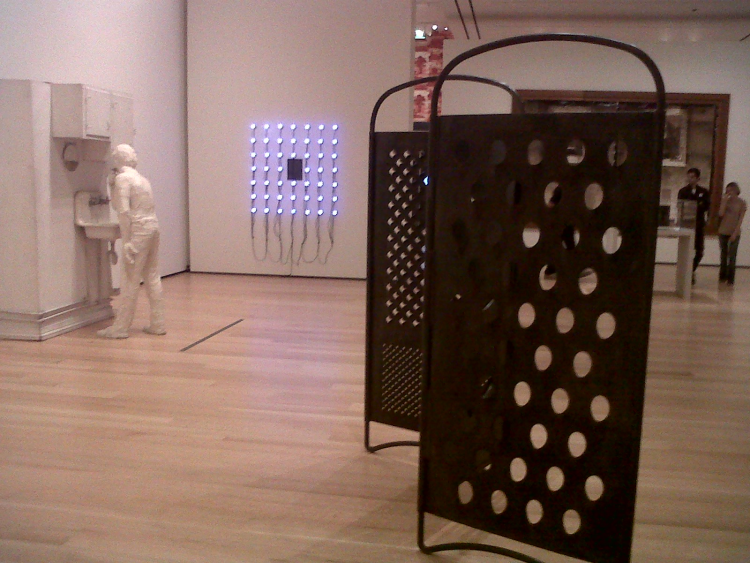 In the foreground: Mona Hatoum’s Grater Divide of 2002, where three panel-style cheese graters are supersized to create a floor screen. In the back left: George Segal's The Artist in His Loft, 1969. The white plaster-gauze figure at first seems real and everyday—it’s a guy shaving, and why are we in his bathroom? Yet it’s also quite unreal—he is live-sized, yet hauntingly vacant and otherworldly.

I finally had the chance to go see the Linde Family Wing for Contemporary Art at the Museum of Fine Arts, Boston.

I’ve got one word for you: go.

The layout is contextual rather than chronological, and frankly some of the choices are downright quirky (in a good way). For instance, the placement of Monet’s La Japonaise makes sense visually, but the piece is a century earlier than virtually everything else around it. Perhaps this is a clever maneuver to get certain types of museum-goers out of the comfort zone of Impressionist galleries and into something new.

Each gallery room has a theme, with the initial room titled, “Art Can Be…” It’s left up to visitors to fill in the rest of the sentence. The rooms also feature cards that pose questions to generate personal inquiry for the art, such as, “What is it made of? Why do you think the artist chose that material?” These questions are a great entrée for the novice, and also create terrific games for engaging young viewers.

Some have commented that this presentation is oversimplified and akin to dumbing-down the material, but in a city that, until recently, has been reticent at best to embrace Contemporary art, this seems like a witty way to engage hesitant viewers. It is also a way to exercise your art history muscles, whether you are a new viewer or a seasoned veteran.

As you move from the Art Can Be… to the What’s it About? gallery, you get to touch and interact with the art. The entryway is partitioned by Felix Gonzalez-Torres’ Untitled (Beginning).

Passing through Gonzalez-Torres’ green and silver beaded curtain isn’t dipping your toe into the shallow end of Contemporary art; it’s doing a cannonball into the deep end without a clue as to the water temperature. The curtain is heavy and makes a clacking, rustling noise as it moves. Just minutes after I passed through, a whole group of college students followed. They stopped gossiping as they did so, and looked up and around and through the beads. They smiled and beamed at each other.

What better entrance to a new Contemporary art space?

As is true of much of the Museum of Fine Arts, the wing mixes furniture and decorative arts with paintings and sculpture. Three video installations are featured in one dark hallway, and no you don’t have to sit for 24 hours to watch Christian Marclay’s The Clock. Instead, try the screaming and dancing New York City lawyers in Ann Carlson and Mary Ellen Strom’s Sloss, Kerr, Rosenberg & Moore, 2007. Their looped performance of 4 minutes 28 seconds is based on phrases and movements the artists recorded during actual legal trials. It is Sisyphean with a dash of humor and empathy.

What makes the Linde Family Wing worth seeing is its thoughtful contextualization. No doubt, some works will speak to you while others are cold and mute, but as a whole they will spark thought and emotion, and isn’t that what art is about?