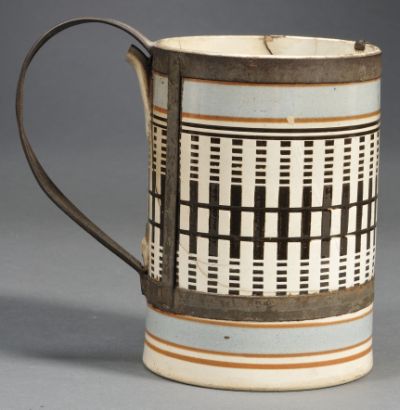 Baseman’s collection is extensive, including everything from 18th century Chinese Export porcelain to 19th century grain shovels. He showcases it all on his delightful blog, Past Imperfect.

In the November 2010 American antiques auction at Skinner, we included fifteen lots of make-dos, mostly porcelain and lighting from one Massachusetts collection. Because of this, the New York Times called me and quoted me in the article, which got me to thinking a little more about this interesting collecting trend.

Make-dos are gaining in popularity as a collecting field. Just in the last five years or so, I’ve noticed an increase in interest among auction-goers. Some like make-dos because of their unique charm—practically no two are repaired in exactly the same way. Beginning collectors like them because they are still relatively inexpensive.

In fact, the most expensive make-do we sold in the November auction, the mochaware pottery mug pictured above, went for $654.75, and the most expensive one Skinner has ever sold, the framed mirror fragment below, went for $2,702.25 in 2005. But for the most part, buyers can get still get make-dos for $200 or less at auction. 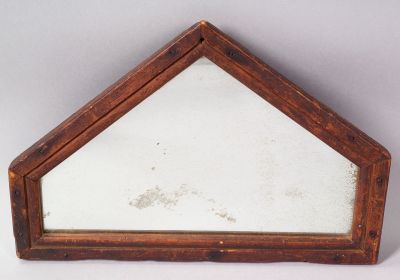 There is also room to specialize. For instance, some collect only mochaware make-dos, while others want lamps or pincushions. I’ve even encountered collectors who want only make-do mirrors, pieces of broken glass carefully framed for reuse. Mirror glass used to be way too expensive to throw away! Or some, like Andrew, cherish them all and find beauty in their quirkiness.

Just as there are multiple reasons people collect these repaired antique objects, there are also many different names for them. The New York Times mentions this dilemma, and I’ve heard clients use names that range from the sentimental to the absurd. “Make-do” doesn’t do it for some, but no one’s managed to make a new name stick.

While I can see how collectors might think that the “make-do” label implicitly slights their collections and, by extension, their taste, I can’t think of another, more appropriate term. So, help me out, what label do you think best describes these quirky but lovable collectibles?

6 thoughts on “Collecting Make-Dos: The Search for Creatively Repaired Antiques”