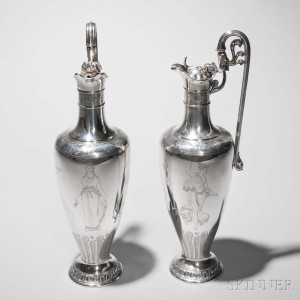 James Horton Whitehouse was one of Tiffany & Co.’s earliest and most well-respected designers, producing many of the firm’s most important pieces during his 44-year career. Born in Staffordshire, England in 1833, Whitehouse was trained in metalworking in Birmingham, England, home of leading silver manufacturer Elkington & Co. Elkington was well-respected not only for the innovative electroplating technique, but for the exception design and quality of both their silver and electro-plated wares. While it is not known if Whitehouse ever worked for the firm, its influence is evident in sculptural quality of his designs as well as the inclusion of classical motifs in his work. Three years after immigrating to New York in 1858, at the age of twenty-five, Whitehouse was hired by Edward C. Moore, head of the silver workshops at Tiffany & Co. from 1851 to 1891, after Moore recognized Whitehouse’s talent and the market for these neoclassical pieces.

Whitehouse’s designs were praised for their use of classical vocabulary and architectural ornament, which became the hallmarks of his personal style throughout his career at Tiffany. He produced a number of the firm’s most celebrated presentation pieces including William Cullen Bryant vase, Bartholdi Testimonial, and numerous medals and swords for the heroes the of the Civil War. 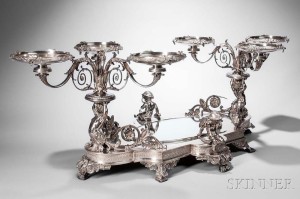 The fine sterling silver centerpiece featured as Lot 252 in our January 12 Fine Silver auction is attributed to Whitehouse based on the modeling of the putti terms, which directly correspond with his other firmly attributed pieces, including the Meiggs centerpiece produced in 1871. This centerpiece also exhibits his strength as a designer in the balance of the sculptural ornaments and also in the use of classical motifs like the acanthus-capped scrollwork and rosette register to the base. (1)