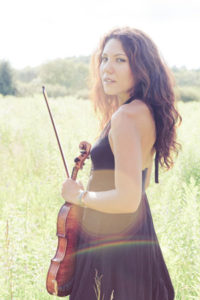 Please join us for a Musical Reception at the Skinner Boston gallery on Friday, May 18 featuring the Yaeko Miranda Elmaleh Group. This reception is held in conjunction with a preview of the May 18 auction of  Fine Musical Instruments online.

Yaeko grew up in Cambridge, Massachusetts, and began violin lessons at the age of 3. Yaeko received a BA in music from the New England Conservatory of Music in contemporary improvisation in 2002 where she studied under Ran Blake and Hankus Netsky, and was classically trained under Fudeko Takahashi. She has received many awards and soloed with many ensembles and orchestras in Massachusetts.

Since graduating she has been a member of the world-renowned Klezmer Conservatory Band (KCB) and has performed throughout the country. As a part of the KCB, Yaeko has had the honor of working with Itzhak Perlman and Cantor Yitzchak Meir Helfgot on the Eternal Echoes Project. As a part of the project, she played on “Prairie Home Companion,” at Symphony Hall and Barclays Center, and recorded for PBS’s “Great Performances.” In addition, Yaeko has had the privilege of performing alongside the great Stevie Wonder at the Boston TD Garden for the Songs in the Key of Life tour. Yaeko has worked with jazz clarinetist Don Byron, actress/singer Bernadette Peters, and has opened for Andy Statman. She also played in the New York run of the musical ‘Shlemiel the First’ under the music direction of Zalmen Mlotek. In 2011, Yaeko recorded her debut album.

Yaeko’s musical style is influenced by her multicultural upbringing: her mother and father immigrated from France and El Salvador respectively in the 1960s. Yaeko’s maternal grandfather was an accomplished impressionist painter and musician that performed with Django Reinhardt and other musicians during the 40s and 50s bohemian era in Paris.