I have spent many hours walking the grounds of the Gettysburg battlefield, tracing the events that took place there in July 1863. Just a few weeks ago, I was at the site again, this time with a beautifully engraved pistol that had been presented to a Confederate soldier who fought in the battle: Capt. Thomas James Eubanks of the 48th Alabama Regiment. 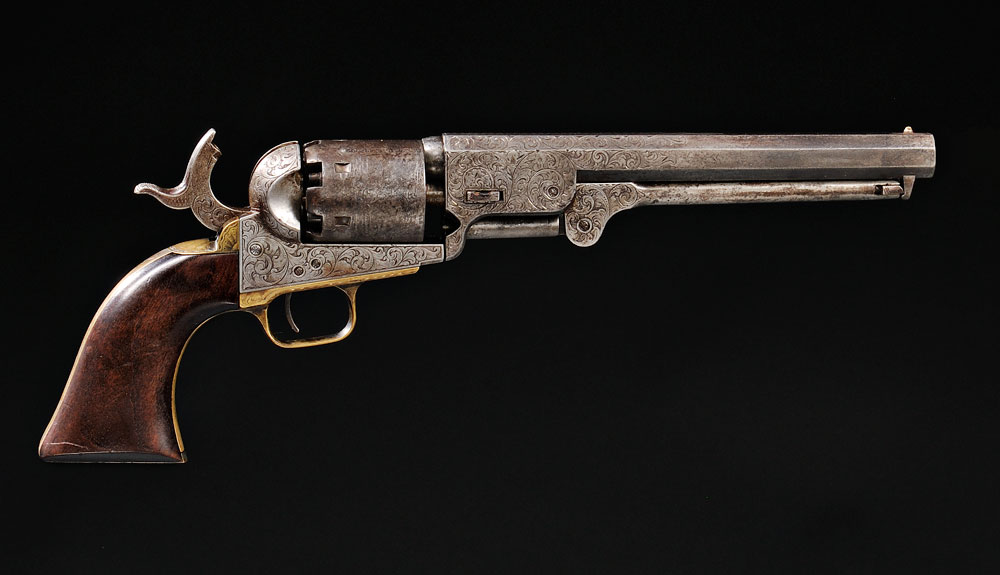 A factory-engraved Colt Model 1851 Navy revolver is an exceptional pistol in its own right, but the story associated with this gun makes it especially significant. When I first took the pistol out of its case, I noticed two inscriptions. The backstrap reads, “T.J. Eubanks, 48th Regt. Ala. Vols. / from the Officers of his company,” and the butt says, “for gallantry/July 1-3, 1863.” Those words made the hair stand up on the back of my neck: the gun had been presented for bravery at the historic Battle of Gettysburg. I knew I had to learn more about who T.J. Eubanks was, and what he did to deserve this gift.

Thomas James Eubanks enlisted in May 1861 as a private in Company K, 9th Alabama Infantry, and was later promoted to Lieutenant, then transferred to the 48th Alabama Infantry. In August 1862, just after the Battle of Cedar Run, Virginia, Eubanks became the Adjutant of the regiment. On April 28th, 1863, he was promoted to Captain and took command of company D. In his military career, he had seen many fierce engagements, and he would see several more before losing his life.

The Battle of Gettysburg 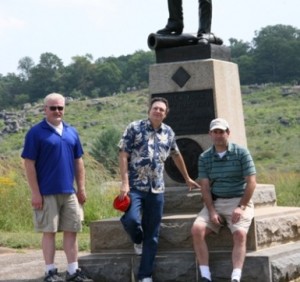 General Hood’s division was called to assist in the battle of Gettysburg, and after a hurried march, they arrived at the southern end of the battlefield, just outside of the crossroads town of Gettysburg, PA, on July 2nd, 1863. Sheffield, Eubanks and the soldiers of the 48th formed the right flank of the brigade, and marched off to the fight.

While I was in Gettysburg this year, I walked the line of their attack, from east of the Emmitsburg Road, across Plum Run. They then wheeled to the north and into the valley between Devils Den and the Round Top, to what was soon to be called the “slaughter pen.”

The regiment tried to take the left flank of the Union position on Little Round Top, and three desperate attempts resulted in failure with heavy losses. In Col. Sheffield’s after action report, he describes the fight:

“On reaching the enemy’s lines, where they were well and strongly situated, I ordered my regiment forward, which was gallantly obeyed until within about 20 paces of their line. Here the men opened fire on the enemy, and for some time continued, until the left, from the loss of men and their exposed position to a fire from the front and from the mountain on the right, were forced to fall back.”

Because other officers had fallen, Col. Sheffield was called to take command of the brigade, and he placed Capt. T.J. Eubanks in command of the regiment. According to Sheffield’s report, Eubanks reformed and carried the regiment to the front until night fell. Out of 275 men engaged, 102 were killed, wounded, or missing, quite a staggering number to say the least. At the end of the report, Sheffield mentions the bravery of some of his officers:

“I cannot close without speaking of those who acted most conspicuously during the hottest of the conflict. Lieutenants Burk and Ewing and Captains Eubanks and Edwards are especially noticed for their gallantry in leading their men forward and remaining in front of their commands encouraging their men.”

A Brave and True Spirit

After the retreat from Gettysburg, units where redeployed, and Gen. Longstreet’s Corps was moved to the south to join the Army of Tennessee. Thomas Eubanks made a short trip home on August 23rd, and was married on September 9th, 1863 to Martha Bennett. He returned to the regiment soon after, and would see action again just days after his return on September 19th and 20th, 1863 at the Battle of Chickamauga, Georgia, and again at the Battle of Wauhatchie, which occurred on October 28th and 29th in Lookout Valley, Tennessee. 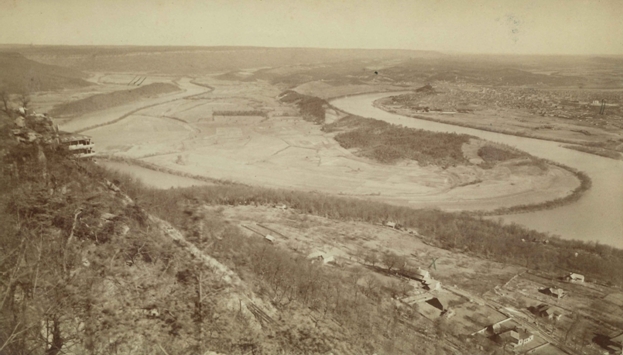 On October 28th, 1863, Eubanks was fending off Union attacks in Lookout Valley. According to an article in the Huntsville Daily Confederate, printed November 4th, 1863, it was 7:00 PM, and the men had lit campfires for the night, preparing to lay down, “in their only blanket and, covered by the blue canopy of heaven, to resign themselves to sleep,” when orders came to be placed under arms.

Capt. Eubanks lead a scouting party to ascertain the location of the enemy. The newspaper reports what happened when they found them:

“A slight skirmish ensued. The enemy retreated. Here, the brave and gallant Eubanks fell mortally wounded, while nobly leading his men, and a spirit, brave and true, passed to the God who gave it. During the progress of this war, many great and good men have fallen, but never have I known one, whose death caused more universal sorrow and regret among his acquaintances, than did the death of Capt. S[T]. J. Eubanks. Peace to his ashes! Gratitude and honor to his memory!”

In a June, 1895 edition of the Guntersville Democrat, another story relates the death of Capt. Eubanks. The story requests information from veterans of the 48th Alabama as to the exact location of his mortal wounding so that a monument to Eubanks could be placed on the site.

This account mentions that the soldiers his scouts encountered that night surrendered to Eubanks and cried, “don’t shoot.” The article goes on to say:

“Capt. Eubanks ordered his men to hold their fire, and in turning to give a command, one of the perfidious foeman grabbed his gun and fired full at the Captain. He missed his mark but a second man followed his example with a more deadly aim and the bullet passed through his belt and pierced his body, and he fell mortally wounded. As to the treacherous wretches who did the dastardly deed, history and traditions are silent. It is probable that they met with the just retribution that should have followed such an act.”

According to the article, Col. Sheffield was informed of the fatal wounding of Capt. Eubanks and remained by his side until his death. Sheffield brought the body of Capt. Eubanks home for his burial, and carried his last words to his new wife and now widow.

This October 28th, 2013 will mark the 150th anniversary of Captain Thomas James Eubanks death at the Battle of Wauhatchie, and in the words of the Huntsville Daily, “Gratitude and honor to his memory!” 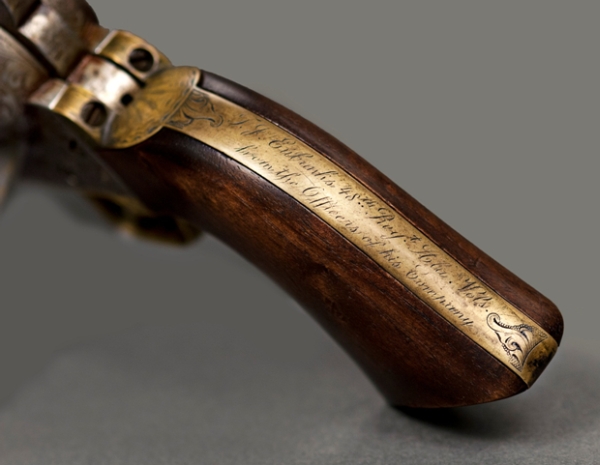 The backstrap reads: “T.J. Eubanks, 48th Regt. Ala. Vols. / from the Officers of his company” 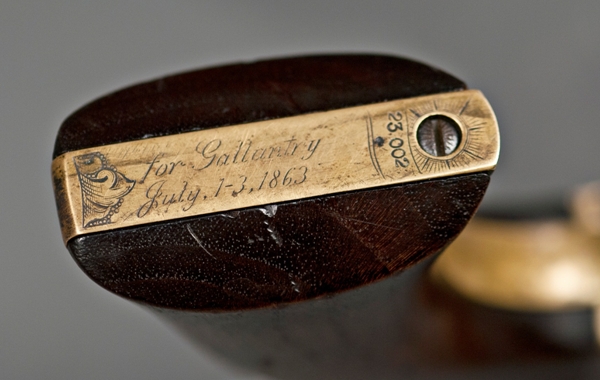 7 thoughts on “Gratitude and Honor to his Memory!”