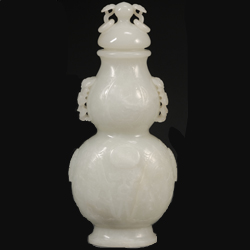 In Skinner’s June auction of Asian Works of Art, Chinese works were in high demand. The auction’s top seller was a large jade vase in the shape of a double gourd, which sold for $578,000.

Another large jade vase of flattened hu form realized over $500,000.  A Huanghuali cabinet from the late Ming/early Qing  dynasty sold for $292,000, and a handscroll, “Si ji shang wan tu” (Appreciating the Four Seasons) from the 18th century sold for $106,650.  Overall, the auction grossed over $4.8 million.

According to James Callahan, Skinner’s Director of Asian Works of Art, “The Asian Art market continues to be strong, driven by extreme interest in Chinese work.”  Callahan continued, “Skinner’s strategy has been to attract the widest possible audience of buyers from a truly international marketplace, and the results show it is working.  For many sought after lots it was an all out bidding frenzy.  Such an opportunity truly benefited the consignors.”