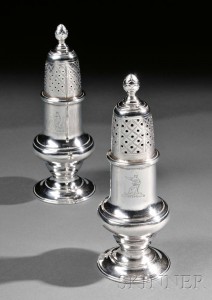 Charles Paine Fisher, or Charlie, as we always called him, was a true Renaissance Man. He developed a plethora of interests and skills, ranging from music to silversmithy, and had a scholar’s thirst for understanding important objects that had descended in his family.

The Fisher family history is full of New England luminaries. Charlie’s father, Richard T. Fisher, was the first Director of the Harvard Forest in Petersham, Massachusetts. His maternal grandfather, Charles Jackson Paine, rose to rank of Brevet Major-General for the Union during the Civil War and led three of the America’s Cup defenders to victory over their English challengers during the 1880s. A century before, Robert Treat Paine represented Massachusetts as a signer of the Declaration of Independence. Charlie’s mother’s parents lived at 87 Mt. Vernon St. in Boston, the current location of the Colonial Society of Massachusetts. Many of the objects presented in the October auction at Skinner originally had a place in the décor of this beautiful home.

Charlie Fisher made a name for himself in the music recording business, transforming the little company, Cambridge Records, into one of the most prestigious labels in both early music performance and contemporary American song. Charlie also invented the “ribbon” microphone, which is still used throughout the recording industry today.

Charlie’s hunger to understand how things work drove his diverse collecting habits, which included antique toasters and radios. He not only collected harpsichords and other musical instruments, he partnered with harpsichord maker Hubbard & Dowd and became adept at construction and restoration. He also learned silversmithy and traditional furniture construction, which deepened the pleasure he took in his own collections of silver and furniture – both inherited and purchased. 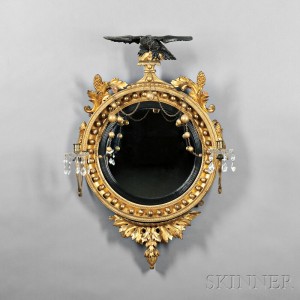 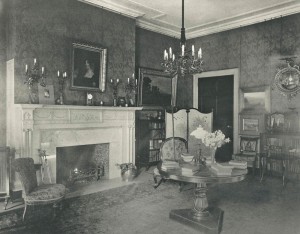 The mirror hangs on the wall in this 19th century photograph of 87 Mt. Vernon St., Boston

A favorite story about Charlie perfectly captures both his mechanically-inclined mind and his sense of humor. One summer day, Charlie and his wife Carole were sitting with friends outside in their screened-in porch. Carpenters on the roof of the house next door were playing loud pop music on a portable radio, intruding on the pleasant summer idyll at the Fisher residence. After the men ignored several polite requests to turn it down, Charlie disappeared into the house for a few minutes and reappeared with some old wires and a vintage radio transmitter, which he proceeded to attach to the metal wire screen porch. He then twiddled some knobs on the transmitter, played with the screen door, and finally succeeded in scrambling the signal to the radio next door. The music ceased, and the men across the way stopped their work, played with the radio for a bit, and finally changed the station. But Charlie twiddled the dials again, and again the radio fell silent, much to the carpenters’ confusion. After some back and forth, the carpenters gave up, and the peaceful afternoon was saved. 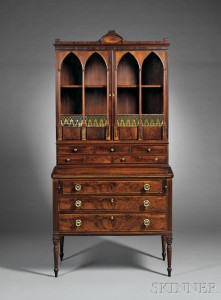 Charlie lived in the second oldest house in Framingham, the Pike Haven Homestead, which, starting in the late 1940s, he carefully restored to a habitable state for his young family. He used authentic materials wherever possible, and matched the style of the original construction, some of which dated as far back as 1693. He also added a large, rectangular, 18th-century-style music room, which was always chock full of musical instruments, books, and treasures of all vintages and varieties. His home helped spark his interest in American furniture and artifacts.

Charlie’s family and descendants hope that the new owners of his silver, furniture, and paintings will appreciate their history, and cherish and appreciate them as passionately as he did.

The Estate of Charles P. Fisher will be offered at auction in Boston on October 27, 2013. View the auction catalog online.